Beyond its deadly foes, epic battles, and dragon-filled world, Dragonlance: Shadow of the Dragon Queen contains an epic adventure with interesting and unique new character options. 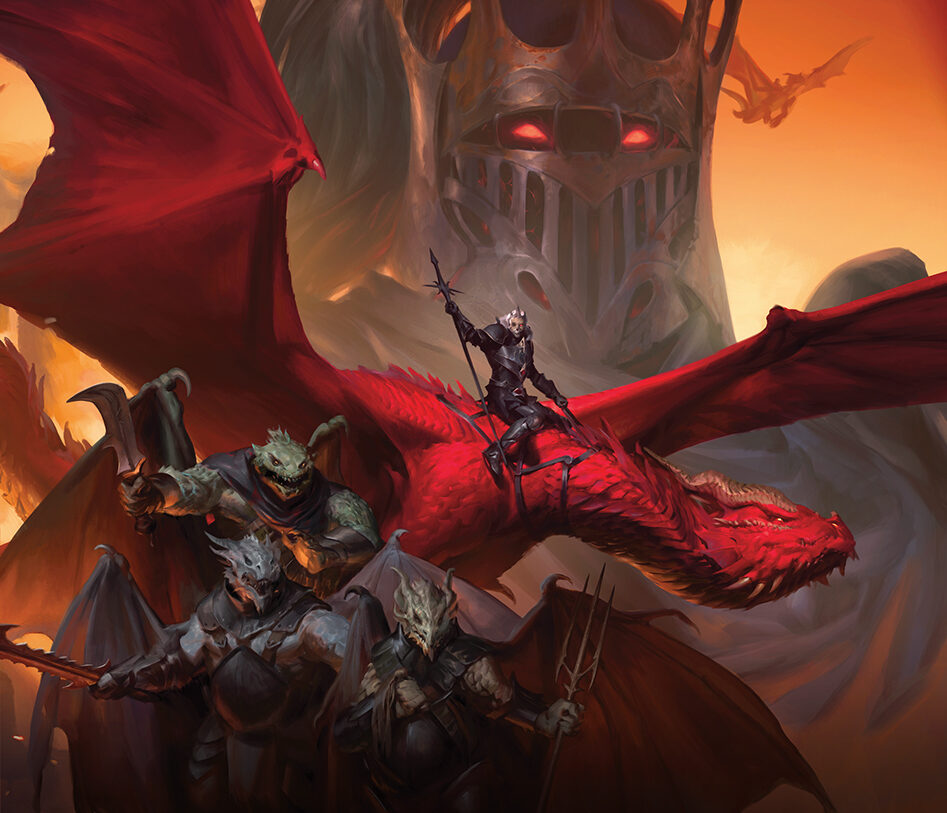 Cynthia Sheppard - Wizards of the Coast - Dragonlance: Shadow of the Dragon Queen Cover

What does Shadow of the Dragon Queen contain? 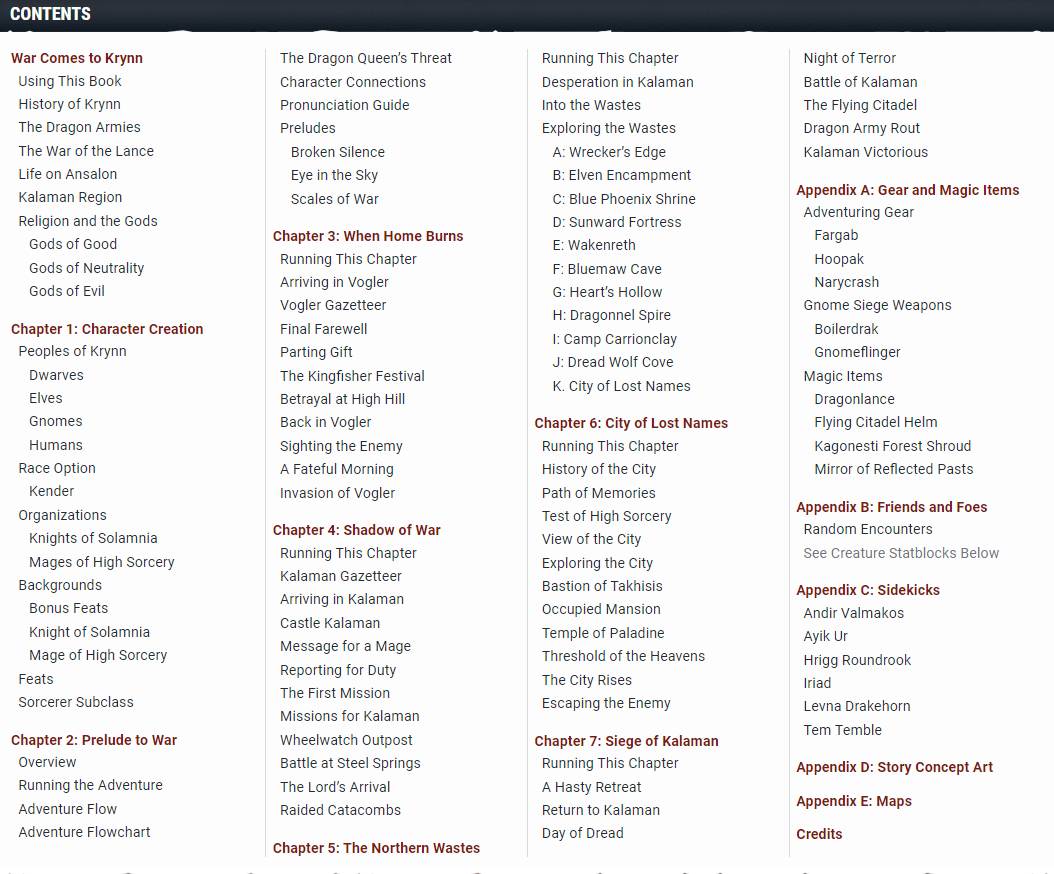 Shadow of the Dragon Queen is an adventure for the 5th Edition of Dungeons & Dragons (5e) that takes players to the long-awaited Dragonlance setting. On the world of Krynn—the realm in which Dragonlance takes place—the party will become embroiled in a war between the evil Dragon Queen’s armies and the free people of Krynn. The fate of the world will rest on the party’s shoulders as they embark on high stake missions to undermine the Dragon Armies’ attempts to uncover a powerful relic.

Player options found in this book and include:

DMs will find everything they need to run this adventure, including:

A Note About Dragonlance

This adventure was written without the guidance of Dragonlance’s founders, Tracy Hickman and Margaret Weis, and it’s meant to be approachable to players who have never encountered the series. As someone who read the books when they were younger, this book barely feels like it was set in Dragonlance. Yes, there are Dragon Armies and kender and Mages of High Sorcery, but Wizards of the Coast mostly gives established Dragonlance lore a wide berth.

If you’re looking to get involved in the War of the Lance with Tanis, Tasslehoff, Sturm, and the Majere brothers, I would look elsewhere for your adventure. If, like me, you enjoyed your time in Dragonlance and now want to be a part of a new story and new era, then this adventure will be just fine.

The first thing you’ll notice when you look at the player options in Shadow of the Dragon Queen is “wow, these are strong.” The feats, backgrounds, and featured subclass are all significantly more powerful than even options found in Tasha’s Cauldron of Everything.

The Lunar Sorcery subclass gives sorcerers gives out 15 spells, discounts to Metamagic, and powerful passive abilities; the backgrounds all provide free feats at 1st-level; and the feats are just plain strong, no question about it. This is, however, supposedly on purpose. First of all, some of these backgrounds and feats are “locked” to the Dragonlance setting. This is the first time we’ve seen prerequisites like this appear in fifth edition and it seems to signal a change in the game’s design philosophy as it leads up to One D&D. Second of all, this adventure features some tough encounters, and the strong player options are meant to make your player’s characters feel like Heroes of the Lance as they clash with the Dragon Queen’s armies.

All in all, there’s nothing in this book that I would outright ban from my table (looking at you, silvery barbs,) and they did a good job making the backgrounds and feats thematic with the setting. The Mage of High Sorcery background, in particular, is cool because players can take the Test of High Sorcery and choose the color of their robs in the adventure. They even did as good a job as they could possibly do with the kender race, making it annoying, but not too annoying.

I haven’t played through the adventure yet, but it looks really solid. The players get roped into a burgeoning conflict when the Dragon Queen’s armies attack the cute little village the party is hanging out in. From there, you head to the city of Kalaman with the town’s refugees where you’re recruited into the military and undergo strategic missions against the Dragon Armies.

Eventually, the party discovers a clue as to what the Dragon Armies might be planning, which sends them to a remote area where they hex crawl their way around. This part was probably my favorite, as it features a lot of open-world RPG elements, like enemy bases you need to attack, and string all of the potential locations together well. The party then heads back to Kalaman for a siege where you (hopefully) drive the Dragon Armies off.

One thing to keep in mind is that this adventure is very heavy on combat, though there is a solid amount of exploration as well. If you’re a more social-focused group that wants to roleplay, this adventure might not be for you.

Another thing to note is that the adventure doesn’t even begin to resolve the War of the Lance in which it is set. The conclusion of the adventure has your party and the defenders of Kalaman drive off the Red Dragon Army, but there are 4 other Dragon Armies currently warring with the continent of Ansalon. Players might be surprised to learn, “that’s it” when they end the siege on the city. So, if you’re not willing to homebrew the rest of the campaign, they could be left with an unsatisfactory conclusion.

If you’re interested in seeing how the adventure plays in real-time, check out our live play of Dragonlance: Shadow of the Dragon Queen:

“Mass battlefield play” is something that was toted as one of the selling features for this adventure. A lot of the encounters your party will experience take place in the middle of a larger battle, which is why these new mechanics are necessary. There are two ways to play these out.

What’s the verdict on Shadow of the Dragon Queen?

I really liked Dragonlance: Shadow of the Dragon Queen and think it’s a pretty solid product all around. That said, before I play this with my tables, I’ll definitely be making sure everyone knows what type of adventure they’re getting into, as this definitely isn’t for everybody.

You will love this module if:

You won’t love this module if:

You can buy Dragonlance: Shadow of the Dragon Queen at your local game store, Amazon, or on D&D Beyond.

Dragonlance: Shadow of the Dragon Queen totes a solid adventure with a compelling story and new combat mechanics and offers players the chance to create a hero that will shape the history of one of D&D’s most prestigious settings.