In this post, we will be examining the fighter’s class features and how you can optimize your fighter through choosing your race, background, ability scores, subclass, and feats. 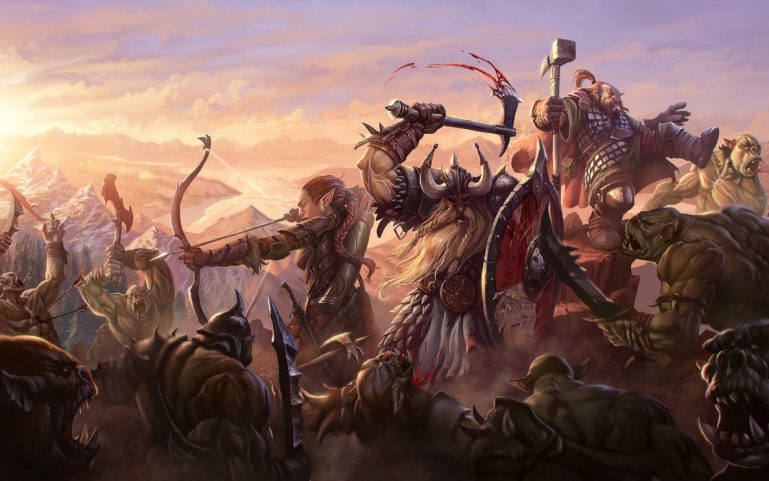 This guide is meant as a deep dive into the DnD 5e fighter. For a quick overview of other 5e classes, check out our Guide to DnD 5e Classes.

The color code below has been implemented to help you identify, at a glance, how good that option will be for your fighter. This color coding isn’t a hard and fast rule; there are plenty of sub-optimized options out there that will be viable to your party and will be fun to play.

So if you’re ready, grab your two-handed greatsword, and let’s get swinging!

Fighters are meant to be among the best damage dealers and soakers in 5e. This means that you will be at your most useful whenever Initiative gets rolled. Outside of combat, fighters can definitely still be effective additions to the party but they will feel out of their element in tricky situations where punching isn’t going to help.

Funnily enough, fighters are good at fighting. They get access to all weapons and armor, and by 2nd-level they are given skills to heal themselves. These class features plus their extra attacks at the 5th, 11th, and 20th-level ensure that the fighter class is the epitome of a melee damage dealer.

Some people may be put off by this and say that they don’t want to play a character that is a one-dimensional “hack and slasher”, but that’s not the case with fighters. Because of the fighter’s varied subclasses, you can definitely go for the straight-up damage-dealing Champion, but you could also play as an Eldritch Knight who uses magic to supplement his melee capabilities or a Battle Master that allows you to influence the battlefield in a strategic manner. No matter what type of fighter you build, you can be sure that they can put down more pain than just about any class in a combat situation.

While fighters are amazing at combat, some complain that they lack versatility outside of combat. Because of their need to output and soak damage in combat, they usually have to put all of their eggs into the STR/DEX and CON basket. This means having low CHA for social interactions and low WIS/INT for problem-solving and spellcasting.

Dragonborn:
Dwarf: Dwarves are a great choice for melee fighters (just look at Gimli). They get bonuses to CON and a free resistance to poison. What’s not to love?
Elf: You're likely not going to play an Elf unless you are a Finesse Fighter or Archer. Elves get a bonus to DEX, free Perception proficiency, and Darkvision, all of which are very important for DEX based Fighters.
Gnome: Eldritch Knights can make use of the INT, though the other subclasses regard INT as a dump stat.
Half-Elf: Being able to take +1 to CON or STR is not enough to make a Half-Elf Fighter optimal.
Half-Orc: +2 STR, +1 CON, and all of the half-orc’s class features are exactly what fighters are looking for.
Halfling: +2 DEX and +1 CON, is a great start for a DEX based Fighter build. Lucky is particularly helpful because of all the attack rolls you will be making.
Human:
Tiefling: Fighters are very versatile, so options with STR, CON, or DEX could work.
Water Genasi: The damage resistance is nice to help you tank, but acid damage won't come up often.

For this section, due to the sheer number of backgrounds available, I am simply going to list the most useful fighter Backgrounds.

Fighters get more ASIs than any other class, which allows them to easily max their important stats and grab a bunch of feats to vary their gameplay.

Fighters can be built in many ways. melee fighters are the simplest, but DEX-based fighters and Eldritch Knights all have different needs.

STR: As STR affects your Attack Rolls and Melee Damage, melee fighters need Strength above anything else. DEX-based fighters can dump this stat.

DEX: DEX will be important for DEX-based fighters as this will contribute to their AC and attack/damage roll. Melee fighters don’t necessarily need DEX, but it is always a worthwhile ability to have.

INT: The only time you should consider stacking INT would be if you are an Eldritch Knight as they cast spells using INT as their spell attack modifier. Even then, an optimized EK build doesn’t necessarily need a high INT modifier for spells.

WIS: WIS is helpful for Perception (the most important skill in the game) but this would be best left up to classes that need WIS for other class features (Rangers, Monks, etc.).

CHA: Again, fighters should typically leave the CHA skill for classes that will make better use of it (Warlocks, Bards, etc.)

Hit Points and Hit Dice: Having a d10 hit dice gives the fighter the second-best hit dice around. The only class that gets a higher one is the Barbarian. Combine this with a high CON score, Second Wind, and heavy armor, this means your fighter will be hard to put down.

Saves: STR saving throws are rare, but you may see them more than other classes because you will be in melee combat. CON saves are a common save for all sorts of nasty abilities.

Proficiencies: All armor, weapons, and shields? Yes, please. You don’t need to worry too much about utility skills like Stealth or Persuasion as the party’s enforcer.

Skills: Athletics (being the only STR-based skill) is a shoo-in for the fighter’s most important skill. The rest of their skills aren’t going to be stellar for most fighters as they are mostly INT, WIS or CHA-based.

Fighting Style: One of the fighter’s iconic abilities, and a great reason to multiclass into fighter.

This optional class feature adds to the list of available fighting style options:

Second Wind: 1d10 + fighter level as a bonus action is certainly a great feature for someone who is going to be in the middle of most fights.

Action Surge: An extra action allows you to do a lot of really powerful things, including a pile of additional attacks. This is a good reason for nearly any class to multiclass into fighter.

Marital Archetype: The 5e fighter archetypes dictate the way your fighter will play. By its definition, the fighter class is considered easier to play than other classes. The class’s strength is its ability to provide consistent damage throughout combat by being able to attack more than any other class in the game. Some people view fighters as “swingy”, but this doesn’t mean that playing a fighter is boring or wrong, fighters are an extremely fun class to play, and depending on the way you play your fighter, you will be able to find plenty of fun and interesting maneuvers in combat.

The Cavalier is a warrior proficient in mounted combat. Even without a mount, Cavaliers are extremely effective melee fighters that have a wide variety of battlefield control options.

Simple and effective, the Champion keeps things very easy by not introducing too many additional mechanics in its class features. Instead, it focuses on improving things that fighters already do, like crit a lot. Unfortunately, increasing your chance to crit doesn't actually net that much damage, despite how good it looks on paper.

Create an echo of yourself that you can use for attacking, teleport, healing, and much more.

The Psi Warrior's Psionic Power gives the fighter a lot of additional utility. Unfortunately, these abilities often rely on your INT modifier. While having a fighter with a high INT is entirely possible, it will come at a tradeoff of becoming MAD (Multi-Ability Dependant) and being able to pick up fewer feats.

A noble knight that can extend their core fighter features to other party members.

Use runes, the language of giants, to infuse your weapon and armor with special abilities.

This optional class feature allows Fighters to replace a Fighting Style or Battle Master maneuver whenever they are granted an ASI. This ability isn’t inherently strong or weak because it is difficult to make strategic changes according to what scenarios you will be facing. This optional feature is mainly here to change an aspect of your build that you don’t like without having to argue with a stubborn DM.

Extra Attack: Fighters get more attacks than any class except for the Monk. This allows Fighters to be incredibly reliable when dealing damage.

Indomitable: The ability to reroll failed saving throws will be extremely important in the upper tiers of play.

Barbarian: No one is shocked here. The Barbarian class gets you Rage and a d12 hit die at 1st-level though, unfortunately, your Unarmored Defense will likely go to waste. Depending on how long your campaign intends to run, 2nd-level and 3rd-level Barbarian is also worth a dip to get Danger Sense, Reckless Attack, and a Path feature. As for Paths, Path of the Berserker and Path of the Totem (Bear) will give you the best features for the lowest amount of trade-off.

Rogue: The Rogue class will synergize best with a DEX Fighter build. A one-level dip gets you access to Sneak Attack and Expertise. A two-level dip gets you Cunning Action. Three levels nets you a Roguish Archetype, the Assassin and Swashbuckler are usually best when combined with the Fighter’s strengths.

Ranger: Rangers are where things get a bit further away from ideal. Luckily, you aren’t restricted with either being a DEX or STR fighter when you choose a Ranger multiclass. Favored Enemy and Favored Terrain are nice, but are much more restricted in their usage than either of the Barb’s or Rogue’s 1st-level features. A two-level dip nets an extra Fighting Style and Spellcasting. Make sure to choose spells that don’t need WIS to be effective, Hunter’s Mark is the best choice here. Absorb Element, Good Berry, and Zephyr Strike are all solid picks for your second spell. A three-level Ranger dip nets a Ranger Archetype, the Hunter is definitely the most conducive towards the Fighter’s strengths though any of the other Ranger subclasses will work if you like the flavor more.