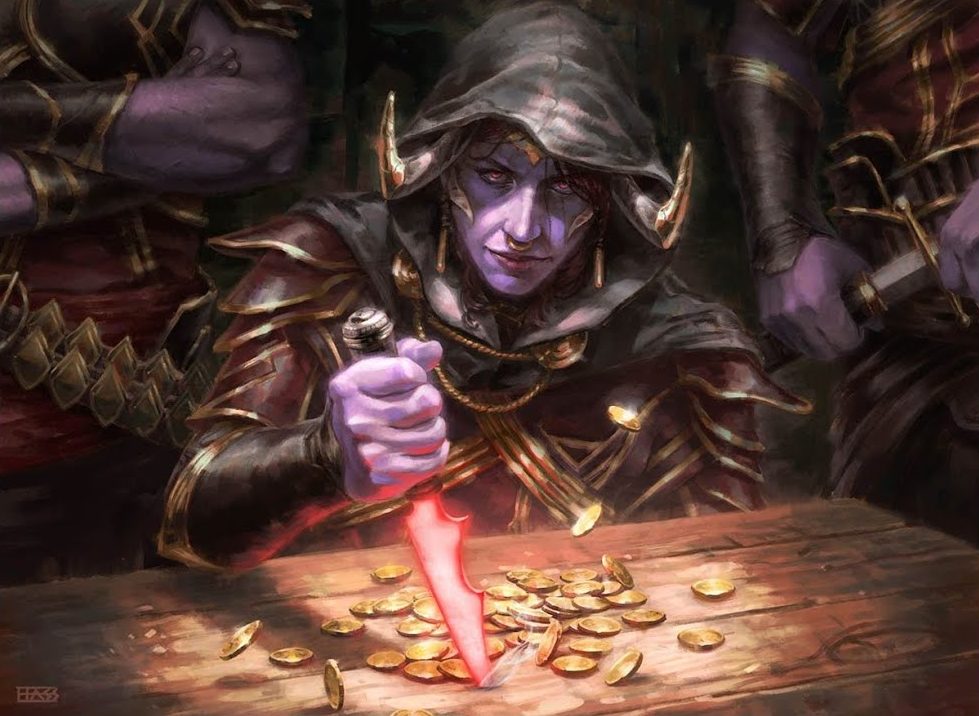 This guide is meant to give you an idea of whether or not the Tiefling will be right for your character build.

The color code below has been implemented to help you identify, at a glance, how good that option will be for your Tiefling. This color coding isn’t a hard and fast rule; there are plenty of sub-optimized options out there that will be viable to your party and will be fun to play.

Tieflings are a race of humanoids, descended from demons and devils who had bred with humans long ago. While they are not inherently evil, their appearance likens that of their ancestors, with horns, tails, sharp teeth, and a wide array of eye colors and skin colors. Due to their ancestry, Tieflings make great thieves and criminals, but are also strong leaders and are fiercely loyal.

Ability Score Increase: A CHA bonus is the bread and butter of several classes. Where Tieflings really shine is the sheer number of different subraces available, all of which come with various secondary ASIs and abilities, making them a passable option for nearly any build.

Size: Medium size doesn’t come with any drawbacks or benefits.

Speed: The Tiefling’s walking speed of 30 feet is standard.

Hellish Resistance: Fire damage is extremely common, whether from enemy spellcasters or monster abilities. Having fire resistance baked into the Tiefling race works wonders for survivability.

The standard Tiefling. ASIs are not synergistic but the Asmodeus Tiefling comes with useful spells.

Very similar to the Asmodeus Tiefling, but comes with less effective spells.

Bloodline of Dispater is a great choice for sneaky characters who want to infiltrate and deceive, but the Bloodline of Glasya comes with better spells for that purpose.

Ability Score Increase: While most CHA casters don’t have access to Heavy Armor, DEX is a natural option for an ASI to help boost AC, Stealthiness, and DEX saves.

The Fierna Tiefling is the only one that comes with a WIS bonus. The package of charm spells can be useful and work in tandem with the massive CHA boost for a very persuasive character.

Ability Score Increase: Most characters choose between WIS or CHA and then dump the other.

The best choice for sneaky builds of all kinds with a fantastic set of spells.

Ability Score Increase:  CHA and DEX is a great combination for sneaky builds, or CHA-based spellcasters that also fight with DEX melee weapons.

The Bloodline of Levistus is the most defense-oriented of the Tiefling subraces.

Ability Score Increase: Nearly any build is happy to see a CON bonus, outside of those that are heavily multi-ability dependent.

Another subrace that comes with an INT bonus. The spells of the Bloodline of Mammon Tiefling are very underwhelming compared to the other similar subraces.

Yet another subrace that comes with an INT bonus, and the most damage oriented of those subraces. Flame Blade is not great though, so consider the Bloodline of Zariel if you want to make weapon attacks.

The only Tiefling subrace that comes with a STR bonus. Combined with the spells the Bloodline of Zariel is perhaps the best choice for a melee Tiefling.

Ability Score Increase: STR and CHA is an interesting combination that is primarily intended, and ideal for, Paladins. Other classes likely won’t want this combination.

The Tiefling Variants provide the only ASI spread without a CHA bonus.

Ability Score Increase (Feral): Good if you want DEX and INT as an ASI instead of the usual CHA.

Tiefling Variant – Hellfire: Replacing Hellish Rebuke with Burning Hands for the Asmodeus Tiefling is mostly a matter of personal preference as they are about on par with each other. Use this subrace if your character prefers the Feral ASI spread over the original one.

Tiefling Variant – Winged: While you lose the free cantrip and spells, gaining fly speed is incredibly powerful. If playing a character that likes INT and DEX, such as a Bladesinger Wizard, choosing this subrace is amongst the best options available. Even if your character doesn’t need both stats, having a fly speed is good enough to be worth it.

Which Classes Work With Tieflings?

Because there are so many subraces and variants for the Tiefling, you will find a suitable option for nearly any class. Choosing a Tiefling subrace or variant with a relevant ASI is a good start to your character.

Artificer: Many of the Tiefling subraces come with an INT bonus, although ideally an Artificer would like +2. As a spellcaster, having more spells at your disposal is always welcome.

Barbarian: While the Zariel Tiefling gets a STR bonus, you can’t cast spells while in a Barbarian rage, making the smites useless a lot of the time.

Bard: Bards love CHA so Tieflings are a great choice. Take Levistus for some survivability or any of the DEX subraces if you want to do some sneaking or melee combat.

Cleric: Fierna Tieflings do get WIS, but Clerics typically don’t want to waste precious ASI on CHA. It’s passable and will make for an interesting character, but won’t be particularly optimized.

Druid: Druids also have the option of the Fierna Tiefling, but won’t be nearly as strong as they could be by choosing another race.

Fighter: Fighters are very versatile, so any of the DEX or STR Tiefling subraces, as well as the variants, will perform well depending on your chosen weapon. Levistus, while not boosting your attacks, will make a fantastic tank character. If playing an Eldritch Knight with DEX weapons, the variants become very appealing because they come with both DEX and INT.

Monk: The DEX subraces offer a nice infiltration package to the Monk, who isn’t typically focused on that area. Variant Tieflings get the biggest DEX bonus and will also work quite well.

Paladin: Consider any of the DEX or STR Tiefling subraces for a Paladin, depending on which weapon you want to use. Also of note is the Levistus subrace for incredible survivability.

Ranger: The Glasya Tiefling has an appropriate ASI and offers some stealth options to make you more akin to a Rogue. Variant Tieflings provide the best DEX bonus for Rangers, although the INT is useless.

Rogue: CHA and DEX subraces are a perfect start for Rogues, especially because those subraces come with some built-in sneaky spells. The variant Tiefling stats also work nicely with Arcane Trickster builds.

Sorcerer: Sorcerers excel with CHA, so any of the subraces will do fine. Ideally, pick one with DEX for AC or Levistus for survivability and CON saves.

Warlock: Warlocks excel with CHA, so any of the subraces will do fine. Ideally, pick one with DEX for AC or Levistus for survivability and CON saves.

Wizard: INT bonus subraces will work just fine with Wizards, although +2 would be preferred. Access to more spells is never a bad thing, and you have the choice of which spells best suit your playstyle. Using the variant option to get DEX and INT ASIs is perfect for Bladesinger Wizards.