In this post, we will be examining the sorcerer’s class features and how you can optimize your sorcerer through choosing your race, background, ability scores, subclass, feats, and spells. 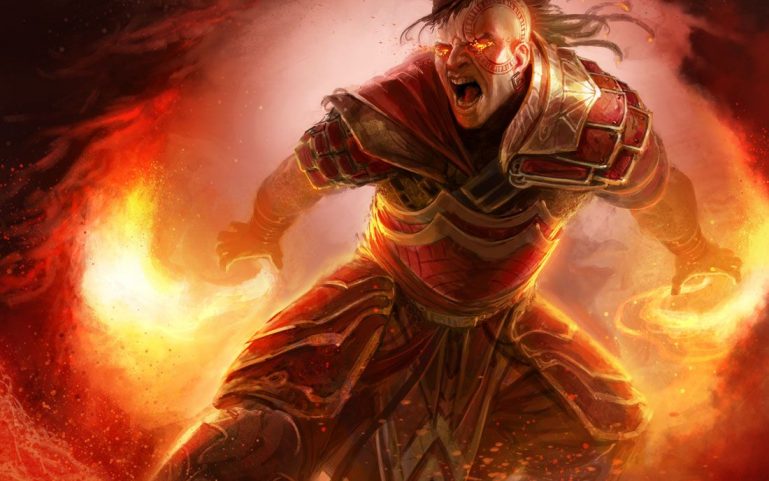 This guide is meant as a deep dive into the DnD 5e sorcerer. For a quick overview of other 5e classes, check out our Guide to DnD 5e Classes.

The color code below has been implemented to help you identify, at a glance, how good that option will be for your sorcerer. This color coding isn’t a hard and fast rule; there are plenty of sub-optimized options out there that will be viable to your party and will be fun to play.

So if you’re ready, thank your father for marrying a dragon and giving you crazy, magical powers.

Sorcerers are different from Wizards in that their magic comes from innate magical talent passed down through their bloodline rather than studying the arcane arts.

Sorcerers have a relatively short spell list, fewer spells they can learn when leveling up, and fewer spell slots when compared to Wizards. This is made up for by their versatility in spellcasting using the Metamagic ability. This ability allows Sorcerers to do things like duplicate spells, weave spells around friendlies, or recover used spell slots.

If you can look at the Sorcerer spell list, find ten spells that you are happy casting all day, every day, and aren’t going to constantly regret not having a dozen other spells available, then the Sorcerer will be a great choice.

Sorcerers are full casters and are constantly compared to Wizards because both classes are entirely focused on spellcasting. The way they differ from the Wizard is a somewhat restricted spell list, the Fonts of Magic/Metamagic class features, and differently formulated subclasses.

Much like Wizards, Sorcerers have access to all of the best damage dealing spells. This, combined with the Sorcerer’s Metamagic, allows them to go “nova” and deal out massive amounts of damage in a single burst.

As mentioned above, Sorcerers have a restricted spell list compared to Wizards. Much like Druids, they learn spells as they level up and cannot learn any more until the next level up. This means that Sorcerers won’t have the utility that some other casters do, but the decrease in variety is certainly made up for in the buff to sheer damage and utility Sorcerer Points can provide.

As with other full casters, Sorcerers are susceptible to melee damage as they have low AC and hit points. They also have to manage their resources more effectively than melee classes. If your party is having a particularly bad day with no time for a Long Rest, Sorcerers can run out of spell slots and Sorcery Points quite easily, meaning they will have to rely on weaker, non-limited spells called cantrips.

Dragonborn:
Dwarf: No CHA is tough and the sorcerer won’t be tanking any time soon. Additional hit points are always helpful.
Elf: Elves get a DEX bonus which can somewhat help the miserable AC of a Sorcerer.
Gnome: Sorcerers need CHA to be effective, of which there is only one subrace.
Half-Elf: The +2 CHA, ASI, and skill versatility make this is one of the better races for the Sorcerer class. The Mark of Storm subrace is particularly tempting because it offers a number of spells while keeping with a solid ability mod bonus.
Half-Orc: Sorcerers need CHA to be effective.
Halfling: Only a +1 to CHA will make Halflings a tough choice for Sorcerers.
Human:
Tiefling: Sorcerers excel with CHA, so any of the subraces will do fine.
Water Genasi: Nothing here for a sorcerer.

Sorcerers need CHA. They have a miserable hit dice so CON is a good secondary pick.

STR: No use beefing out your sorcerer.

DEX: Early AC can help survivability, but there are better options.

CHA: Your spellcasting modifier and great for face skills.

Hit Points: Sorcerers have a measly d6 hit dice. You can somewhat mitigate this by increasing CON since you only need to worry about CHA as your main stat.

Saves: A proficiency in CON saving throws is awesome for casters because they are used for Concentration checks. CHA saves are much less common but can keep you from being banished at later levels.

Proficiencies: No armor proficiencies and the weapon choice is barely worth mentioning. But you weren’t really hoping to swing a greatsword with your sorcerer, were you?

Skills: Unfortunately the sorcerer only gets to pick two skills.

Spellcasting: If you want to cast spells you’ve come to the right place. Sorcerers are a full caster. Unfortunately, they don’t get to learn as many spells as most of the other caster classes. Sorcerers can use an arcane focus as their spellcasting focus.

Lunar Sorcery sorcerers channel celestial power through the moon. Depending on the phase of the moon you channel your power from, your sorcerous abilities will alter themselves to match aspects that phase represents.

Fonts of Magic: With sorcerers, flexibility is the name of the game. You might not get access to as many utility spells, but your damage spells are going to be more applicable and more effective than other casting classes. Fonts of Magic provides flexibility to create more spell slots, or use sorcery points to manipulate your spells with Meta Magic. Keep in mind, you have to finish a long rest to get your sorcery points back.

Metamagic: As mentioned before, sorcerers are mainly focused on damage dealing and it shows in the Metamagic abilities. Most of the abilities allow you to hit enemies harder, faster, and more effectively than other casting classes. You gain access to 2 of these at 3rd Level

You gain another Metamagic option at 10th and 17th level.

Sorcerous Versatility: Change out underperforming cantrips or metamagics at every level, which is something your DM would typically allow you to do anyway. This optional feature has been introduced to each class in some capacity in TCoE.

Magical Guidance: Use sorcery points as a pseudo-Lucky feat for ability checks only. Sorcerers are sorely lacking ability proficiencies so this will help to offset them.

Sorcerous Restoration: It’s not a particularly impressive capstone ability but it can be useful for a long adventuring day at 20th-level.

Paladin: The Sorcadin is considered one of, if not the most powerful multiclass options in D&D 5e. This build allows for an awesome cross between a tank and a caster and allows for insane nova damage. The most common Sorcadin build is Paladin 2 / Sorcerer 18 which allows you get to get access to armor/shield/weapon proficiencies, Lay on Hands, and smites. Only dipping two levels into Paladin restricts access to some nice Paladin features like Aura of Protection and extra attacks, but it gives access to high-level Sorcerer spell options, plenty of sorcery points, and the Sorcerer Origin capstone feature.

Warlock: Warlocks get access to a ton of stuff at 1st-level. First off is the amazing damage cantrip Eldritch Blast, next up is the ability to restore Warlock spell slots on a short rest, and finally is the Pact feature. The Celestial Pact has some healing features, but by far the best choice would be the Hexblade for access to Hexblade’s Curse, proficiency in medium armor/shields, a great expanded spell list, and the ability to melee attack using your CHA modifier.