In this post, we will be examining the Rogue’s Class Features and how you can optimize your Rogue through choosing your Race, Ability Score, Spells, Feats, etc. This article will focus primarily on content from the Dungeon Master’s Guide and Player’s Handbook, but will also delve into some of the content in the Sword Coast Adventurer’s Guide and Xanathar’s Guide to Everything. 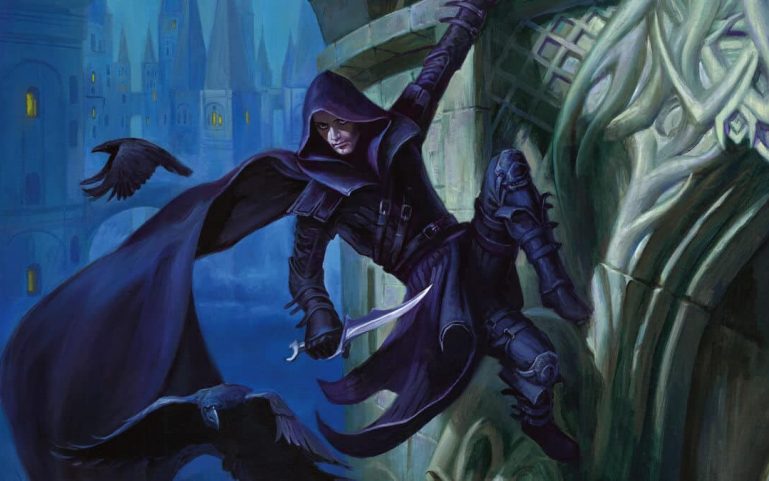 The color code below has been implemented to help you identify, at a glance, how good that option will be for your Rogue. This color coding isn’t a hard and fast rule; there are plenty of sub-optimized options out there that will be viable to your party and will be fun to play.

So if you’re ready, let’s get sneaky!

As a side note, if you love to play a stealthy character, consider pitching our guide to fixing stealth in DnD 5e to your DM. We’ve had a lot of fun with this one.

Rogues are definitely for the players that like to lie, cheat, steal, and backstab their way to victory. Because of the way their class features are activated, Rogues need to constantly be thinking about how to get an advantage over their enemies. The tendency of Rogues to be the scout of the party, combined with the unique nature of their combat abilities, means that Rogues are certainly among the more technical melee classes to play.

Rogues are the stealthy thieves and assassins of the DnD world. Commonly referred to as “skill monkeys”, they are proficient in more skills than any other class except for Bards, which allows them to take the lead on a lot situations your party will run across. Things like scouting ahead, picking locks, and silently taking out enemy patrols are common tasks on a Rogue’s laundry list.

Rogues in 5e get an ability called Sneak Attack which allows them to get extra damage on unaware or flanked enemies. This ability goes hand in hand with the Rogue’s tendency to be the party’s scout and also dictates their more “hit and run” style in combat. This ability provides an insane amount of single target damage and is the Rogue’s main way to keep up with the damage output of the other melee classes.

Rogues also get plenty of extra action economy from their Cunning Action class feature which allows them to disengage, dash, or hide as a bonus action.

Rogues are not front-line warriors; they have neither the hit points nor the AC for prolonged exchanges. If your party gets caught out in the open and without the element of surprise Rogues can go down pretty easily.

Due to their high number of proficient skills, Rogues are usually scouting out ahead for dangerous situations. One bad roll could mean your Rogue gets discovered by a group of baddies or fails to notice a trap that drops you into a spike pit.

Rogues are DEX-based characters, so prioritizing those races will make them better at everything they want to do. CON is also worth considering. Because they want to be sneaking and scouting undetected, races with Darkvision are particularly useful for this class. Luckily, many races come equipped with Darkvision.

Dragonborn: No DEX for a Rogue. Darkvision won’t make up for the poor ability bonuses here.

Dwarf: CON bonus and Darkvision are nice, but Dwarves have a base walking speed of only 25 feet. Mobility and a +2 to DEX are critical for the Rogue Class.

Elf: A +2 to DEX, Darkvision, and proficiency in the Perception skill. Nice!

Gnome: Darkvision is the only saving grace for a Gnome, but an Arcane Trickster would benefit here.

Half-Elf: No +2 to DEX will be a huge burden for Rogues, but skill versatility can be important for skill monkeys. If your rogue is going to be the party’s face, you can get away with a +2 CHA, +1 DEX, and pickup Deception and Persuasion.

Half-Orc: Ability score increases of the Half-Orc won’t be helpful for a Rogue.

Halfling: Halflings get a DEX bonus, and Lucky is good. Halfling Nimbleness allows for more movement options, which can only benefit a Rogue.

Tiefling: The classic Tiefling from the Player’s Handbook isn’t that great for a Rogue outside of certain builds. Darkvision and resistance to fire is decent.

For this section, due to the sheer number of backgrounds available, I am simply going to list the most useful Rogue Backgrounds.

The main goal of the Rogue is to have high DEX. Secondary goals can be increased CON for survivability, INT for Arcane Trickster builds, and WIS and CHA for ability checks.

STR: Leave the heavy lifting to your friends.

DEX: Rogues love DEX! You will want to get this to 20.

INT: Don’t worry about INT unless you are playing an Arcane Trickster.

CHA: Rogues can be a good character for CHA skill checks if needed by your party.

Hit Points: 1d8 hit points isn’t the worst around, but Rogue’s will have to be careful about their positioning on the battlefield.

Saves: DEX saves are among the more useful saves, but INT won’t come up too often.

Proficiencies: A combination of good weapons and access to Thieves’ Tools makes Rogues well equipped for their adventures.

Expertise: Not only are Rogues proficient in many skills, they can either double their proficiency bonus for two skills or a combination of one skill and their Thieves’ Tools. Failing skill checks with those skills will be much less common.

Sneak Attack: The bread and butter of the 5e Rogue. The damage scales as you level up ensuring that the Rogue’s main source of damage will always be relevant.

Thieve’s Cant: Thieve’s Cant is cool for roleplaying purposes, but even then it only really applies when encountering NPCs that also know Thieve’s Cant.

Cunning Action: This class feature pairs very nicely with the Rogue’s game plan. Use a Dash, Disengage, or Hide action as a bonus action to line up some Sneak Attacks or to move around the battlefield efficiently.

At 3rd level Rogues get to choose their Roguish Archetype. All options have their merits, but will require different ability score distributions and feats to be at their best.

Uncanny Dodge: Rogues aren’t the tankiest class in D&D, and Uncanny Dodge is a fantastic way of avoiding damage.

Evasion: DEX saves are now even better, ensuring that you will never take full damage from sources requiring one.

Blindsense: Invisible creatures can be punishing, and you’ll likely be glad to have this class feature at least once during a campaign.

Elusive: By this point the Rogue won’t go down easy, even with its average hit points.

Stroke of Luck: You may have noticed how powerful the Rogue’s class features are, and Stroke of Luck is the icing on the cake. Never again will you miss an attack or fail an ability check! At least once per short or long rest, that is.

Picking feats over ASI is something any Rogue should consider. However, this decision largely comes down to the build you are playing. Most Rogues will become powerful as their DEX approaches 20 and can afford to take some feats here and there. Meanwhile, Arcane Tricksters like to invest points in INT as well, and by focusing on feats you might find yourself with low stats further down the line. In any case, these are the feats that are most often considered when building a Rogue.