In this post, we will be examining the ranger’s class features and how you can optimize your ranger through choosing your race, background, ability scores, subclass, feats, and spells. 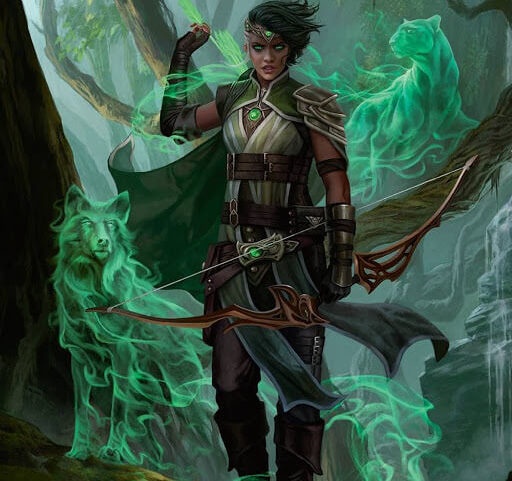 Magali Villeneuve - Wizards of the Coast - Vivien of the Arkbow

This guide is meant as a deep dive into the DnD 5e ranger. For a quick overview of other 5e classes, check out our Guide to DnD 5e Classes.

The color code below has been implemented to help you identify, at a glance, how good that option will be for your ranger. This color coding isn’t a hard and fast rule; there are plenty of sub-optimized options out there that will be viable to your party and will be fun to play.

So if you're ready, let's venture into the wilderness!

The 5e ranger is a master of survival who uses their knowledge of the outdoors to track foes and provide advantages in combat. The common motif around the ranger in DnD 5e is a skilled hunter, tracker, and woodsman, most at home on the fringes of civilization and the first line of defense against threats from the wilds.

Most ranger are played as loners in social settings and will be more than happy to scout out ahead for the party.

The 5e ranger is a controversial class because they are typically deemed as being underpowered. Their early level’s class features provide zero benefits if you are not in the proper environment or fighting the correct monster. This can make your ranger feel limited in their abilities, compared to other versatile classes.

The common motif around the ranger in DnD 5e is that of a skilled hunter, tracker, and woodsman, most at home on the fringes of civilization and the first line of defense against threats in the wilds.

Most ranger are played as loners in social settings and will be more than happy to scout out ahead for the party. While their semi-caster status gives them some versatility, their class features get nerfed quite hard when traveling in environments that are not preferred or fighting enemies that are not their favored type.

Rangers are the best of the martial classes against multiple enemies and hordes. Many of the ranger’s combat abilities are designed for attacking multiple foes in a turn. To bolster that role, ranger also have area of effect spells that can damage multiple foes.

Many of the ranger’s abilities, including the Favored Enemies and Favored Terrains class features, are highly situational and don’t always mesh well with the campaign’s setting, especially if you are traversing an environment where opportunities to scout are at a minimum.

Dragonborn:
Dwarf: +2 CON and Darkvision are nice.
Elf: +2 DEX is exactly what you are looking for with a Ranger. Advantage on saving throws against being charmed and immunity to sleep is icing on the cake.
Gnome: INT is useless for a ranger.
Half-Elf: The CHA bonus is largely unproductive for Rangers, but increasing two ability scores by 1 allows you to boost WIS and STR/DEX to create a rather well-rounded character. Advantage on saving throws against being charmed and immunity to being put to sleep is nice. The +2 WIS bonus offered by the Mark of the Detection subrace is very tempting for rangers as it is not offered by many other races. The spells are an added bonus to the Ranger's limited spell list.
Half-Orc: No WIS or DEX for rangers which is typically where they want to be. However, half-orcs are a great choice for STR-based rangers.
Halfling: +2 DEX and +1 WIS is the ideal starting array for Rangers. Lucky will help you with your attacks and you can ride your beast master companion into battle as long as it's a medium creature or larger.
Human:
Tiefling: Look for subraces with DEX or use the Feral variant.

Sticking with the fact that we are going for DEX and WIS for a ranger doesn’t leave us with a ton of options for backgrounds:

Prioritize DEX over the other Ability Scores. Once WIS is maxed, the decision is between CON and WIS based on the Ranger Archetype you choose.

STR: This is a definite dump stat for rangers as they can get by with finesse weapons if you want to go melee.

DEX: Seeing as the only armor rangers have access to is light or medium, DEX is your primary means of defense (it’s better to be missed than hit with some extra HP). DEX also plays into your weapon attacks, damage, Initiative, the all-too-common DEX saving throw, and the very important Stealth skill.

CON: If you plan to go for a melee ranger, it is best to forgo WIS in place of CON. This will allow you to maintain concentration on your awesome hunter’s mark spell. If you’re going for a ranged ranger you can save this for after you stack your WIS.

WIS: If you plan to go for a ranged ranger, it is best to forgo CON in place of WIS. This will allow you to get your spell save DC and spell attack modifier to a relevant level. If you’re going for a  melee ranger you can save this for after you stack your CON.

CHA: Rangers shouldn’t try to focus on social skills outside of WIS based ones. If you must, the overall effectiveness of the character will suffer.

Saves: Proficiency with STR and DEX saves is great. DEX saves are extremely common, STR saves are less so but helpful against being knocked prone and restrained.

Skills: Rangers aren’t known for their diverse skillset. They can only choose three of the following eight skills.

Favored Enemy: You can select your favorite (or least favorite, I guess) creature type and gain some minor bonuses, such as: advantage on tracking them and recalling information about them. This feature is certainly a weak class feature and is where the ranger class begins to go off the rails a little bit.

The creatures to choose for your Favored Enemy vary wildly by campaign, but looking at the Monster Manual shows us that Beasts, Fiends and Undead are very likely to show up. Beasts are likely to show up at lower levels, but you get to choose more favored enemies at 6th and 14th level.

Natural Explorer: Natural Explorer is a stronger passive ability than Favored Enemy but is still extremely situational. You can choose one of eight possible terrains to gain a myriad of bonuses in, but if you’re not in the chosen terrain you are SoL.

Deft Explorer: This optional feature replaces Natural Explorer and makes the rangers expertise a lot less situational. The expertise you get at 1st level, likely Stealth or Perception, will be useful across plenty of scenarios. At 6th level, you boost your walking speed by 5ft and get a climbing and swimming speed which drastically helps your movement options. At 10th level, you can some minor healing abilities and can reduce exhaustion levels after a short rest, rather than a long rest, both of which help your longevity over an adventuring day.

Favored Foe: An interesting alternative to hunter’s mark. It does less damage until 6th level, when the die increases to 1d6, but can be activated automatically when you hit a creature. This, compared to hunter’s mark which allows you to track your quarry and can be switched between targets makes it a bit of a toss up between the two. Unfortunately, it still requires concentration, but at least it’s more versatile than Favored Enemy, which this feature replaces.

Spellcasting: Rangers are a semi-caster, this means they only get spell slots up to 5th level and no Cantrips. Their spell list focuses mainly on passive, utility/survival abilities, with the exception of hunter’s mark. Hunter’s mark is to rangers as hex is to warlock. It is their bread and butter extra damage spell that keeps their attacks on a similar level to fighters and their extra attacks.

Primeval Awareness: This is…not a great ability. You can tell when certain creature types are within 1 mile, but not their location or number. Definitely not worth a spell slot 90% of the time.

The Beast Master has an animal companion that aids them on their journey. This subclass was revised in Tasha's Cauldron of Everything to help fix issues which prevented the Ranger's Companion from being effective.

The Drakewarden can summon a drake companion that follows you into combat and grows as you level up.

Infused with the power of the Feywild, Fey Wanderer rangers can beguile their enemies and move effortlessly across the battlefield.

Swarmkeepers conjure a swarm of nature spirits to add them in battle.

Martial Versatility: This optional class feature allows rangers to replace a Fighting Style whenever they are granted an ASI. This ability isn’t inherently strong or weak because it is difficult to make strategic changes according to what scenarios you will be facing. This optional feature is mainly here to change an aspect of your build that you don’t like without having to argue with a stubborn DM.

Extra Attack: Extra attacks are the bread and butter of all the martial classes. Like the other semi-caster, the Paladin, Rangers only get 1 extra attack. Luckily, they have Hunter’s Mark to make up for lost damage.

Land’s Stride: Being immune to nonmagical difficult terrain will come in handy a couple of times per campaign, but it isn’t a huge game-changer.

Hide in Plain Sight: This is great for ambushing creatures, something that Rangers really like to do. It is extremely nerfed by the fact that you have to camouflage after each time you move, making this useless for infiltrations.

Nature’s Veil: This is so much better than Hide in Plain Sight that it’s plain ridiculous. Turning invisible as a bonus action is amazing for combat, allowing you to potentially position yourself to attack from an unseen position, thereby getting advantage. Unfortunately, it’s a short duration (only 6 seconds at a time), so it’s not particularly useful for out of combat, unless you can make the short burst of invisibility work for you.

Vanish: Being able to Hide as a bonus action will be very beneficial for the Rangers, who like to stay at a distance among cover. Being untrackable by nonmagical means can be beneficial as well.

Feral Senses: This is great if you have to fight an invisible creature, something that may or may not happen when you are this late into the campaign.

Foe Slayer: A great ability, massively limited due to the fact it can only be applied to your favored enemies.