In this post, we will be examining the barbarian’s class features and how you can optimize your barbarian through choosing your race, background, ability scores, subclass, and feats. 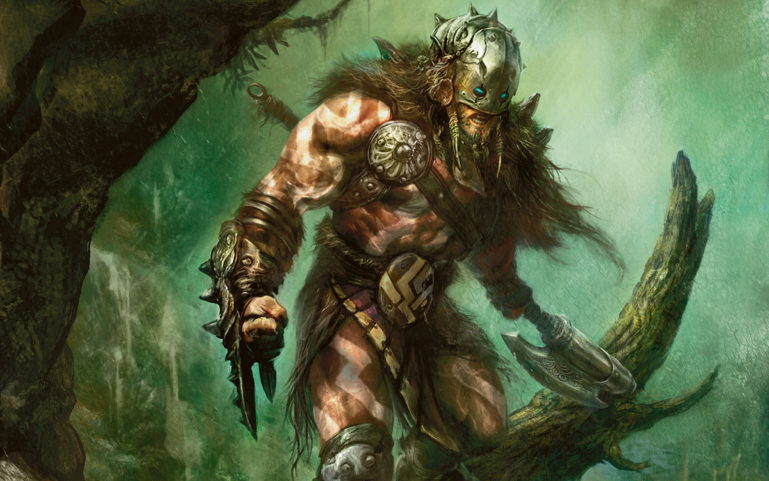 This guide is meant as a deep dive into the DnD 5e barbarian. For a quick overview of other 5e classes, check out our Guide to DnD 5e Classes.

The color code below has been implemented to help you identify, at a glance, how good that option will be for your barbarian. This color coding isn’t a hard and fast rule; there are plenty of sub-optimized options out there that will be viable to your party and will be fun to play.

So if you’re ready, grab the biggest weapon you can find and smash away!

If you take a look at the barbarian’s class features, it’s pretty obvious how barbarians are meant to be played. Due to the barbarian’s propensity for combat, you are usually going to put all of your ability points into STR and CON, while dumping the other stats. This will give you the fantasy equivalent of the Hulk (complete with the uncontrollable rage!), which may leave you with a bit of a meathead but at least it will be your meathead.

Barbarians are the kings and queens of melee damage in 5e. They have the ability to go into a Rage to get a bonus to any check made using STR and a nice boost to damage. Barbarians also gain the ability to attack recklessly, which makes it easier to hit opponents, with the caveat that they get to hit you more easily.

Barbarians have the unique ability to absorb tons of damage. They have the highest hit dice in the game and when combined with a maxed out CON skill, will give them a ridiculous amount of hit points. As a bonus, when they Rage Barbarians take half damage on all physical attacks. Talk about tanky.

The barbarian’s weaknesses are what you might expect from the beefiest character class in 5e. Barbarians aren’t going to offer a whole lot in the way of utility, they’re more of a “go here and hit that” type of character.

In a situation in which they can’t punch, kick or bite their way out, barbarians won’t be a lot of help to the party.

Dragonborn:
Dwarf: Dwarves are a great choice for melee barbarians. They get bonuses to CON and a free resistance to poison. What’s not to love?
Elf: Nothing here for a Barb.
Gnome: Barbarians need STR to be effective.
Half-Elf: Being able to take +1 to CON or STR is not enough to make a Half-Elf Barbarian work.
Half-Orc: +2 STR, +1 CON, and all of the half-orc’s class features are exactly what barbarians are looking for.
Halfling: The +2 to DEX and +1 to CON provided by the Stout Halfling may make enough of a case to use it for a Barbarian build. Lucky doesn't hurt either.
Human:
Tiefling: Only one subrace comes with a STR bonus.
Water Genasi: Another resistance is nice, but acid damage won't come up often.

Barbarians value STR above all else, followed by CON. DEX shouldn’t be ignored so you can either equip armor or rely on the Unarmored Defense class feature.

DEX: Good DEX means a higher AC and access to better armor options. People will expect you to fill the role of the tank, so consider some DEX.

CON: As the tank, expect a lot of hits to come your way since you will likely be on the front lines. With Unarmoured Defense, your CON bonus also contributes to your AC.

INT: Dump for sure. You’re not out here trying to get a PhD.

WIS: WIS saves happen all the time, but barbarians will likely survive even on a failed save.

Hit Points: Barbarians are blessed with d12 hit dice, the best around.

Weapon/Armor Proficiencies: Barbarians have access to most of the weapons and armor they could ever need.

Skills: Only two skills from a small list, but there are some good options here.

Rage: This is the reason to play a barbarian. Advantage on STR checks and STR saving throws bonus damage, and damage resistance pairs perfectly with the playstyle. Rage is also the reason not to go for heavy armor proficiency since you don’t get the benefits in that case. Regardless, running around without armor or medium armor should serve you just fine.

Unarmored Defense: Perfect for roleplaying if you want to play the typical shirtless barbarian, and can help give a boost to AC at early levels. Once you have access to the best medium armor (half plate), Unarmored Defense is strictly worse for most stat combinations you will likely achieve. This means you should really only boost your DEX high enough to equip medium armor and let your damage resistance and large hit point pool handle the rest. On the other hand, with 20 DEX + 20 CON + a shield, you can attain the highest possible AC for playable classes D&D 5e, so that’s pretty cool too.

Danger Sense: Advantage on DEX saves is awesome and definitely will contribute to your longevity in battle.

At 3rd level barbarians may choose their Primal Path. None of the options are outright unusable, so choose the subclass that benefits your party the most or simply the one you think you will enjoy.

Path of the Ancestral Guardian

As the name implies, the Path of the Ancestral Guardian excels at tanking and protecting your party. For that purpose, this build is one of the best in all of D&D 5e, but if you're looking to maximize damage you won't find that here.

Path of the Battlerager is a strange subclass. The most important thing to know is that it is restricted to dwarves, but luckily dwarves are one of the best races for barbarians. Secondly, to even consider playing this subclass you need to make sure that you can get spiked armor. It is probably a good idea to talk to your DM about this and make sure they are willing to let you acquire it relatively early on. Aside from these oddities, the Path of the Battlerager is not particularly strong compared to the other subclass options. It can be fun, however, especially when played as a grappler build.

Path of the Berserker

The Path of the Berserker is what most people would associate with the barbarian archetype. If you just want to hit things, and be really good at hitting things, this is the subclass for you. While none of the features are overly exciting or unique, this build is straightforward and effective.

Path of the Storm Herald

The Path of the Storm Herald adapts well to change. Starting at 3rd level, every time you level up you may choose an environment from desert, sea or tundra, and that affects what abilities you have access to. Unfortunately, you don't always level up when it would be ideal and you usually don't know what dangers lie ahead. Still, it's mechanically interesting and will keep things fresh, all while being useful to whatever party makeup you run with.

Path of the Totem Warrior

The Path of the Totem Warrior is the complete package. There are options for tanking, dealing damage, movement capabilities, and aiding your party. On top of that, the gameplay with this subclass is less clear-cut and requires more thinking, making it very fun to play. The expanded options for the Totem Spirit are the elk and tiger, found in the Sword Coast Adventurer's Guide.

Path of the Zealot

Cool for roleplay. Dying becomes more of an inconvenience than a game ending problem. Coupled with a bit of extra damage, the Path of the Zealot is a fine subclass but lacks any serious direction.

Extra Attack: Every martial class is excited when they get extra attacks since it effectively doubles damage output. Remember that if you apply your Reckless Attack on the first attack, it works for your extra attacks as well!

Fast Movement: You won’t want heavy armor so your Barbarian will get the benefit of Fast Movement. While very useful, especially if playing with battle maps, Fast Movement isn’t as impactful as most of the other Barbarian class features.

Feral Instinct: Really useful. It’s a big deal for the Barbarian to be at the front lines to protect the more vulnerable party members, so advantage on Initiative helps there. Avoiding surprise attacks against you is another tool in your long list of ways to mitigate damage coming at your character.

Brutal Critical: Does make critical hits brutally effective, but they only happen 5% of the time you make an attack roll.

Relentless Rage: With a decent CON score you may be able to pull this off more than once per short rest, making you a real thorn in the side of your enemies. When you do finally get knocked to 0 hit points, hopefully you’ve had enough of an impact on the battlefield that the battle ends shortly thereafter.

Persistent Rage: An annoying part of Rage is that situations do occur where you can’t move or don’t have enough movement to engage the next enemy, causing it to end at an inconvenient time. Since you can only Rage a finite amount of times per Long Rest, Persistent Rage helps you conserve your uses so that you can activate it for every tough battle throughout the day. If your rage lasts longer than 4 hours, please consult a physician.

Indomitable Might: If you like to grapple and have a maxed or nearly maxed out STR score, there won’t be much your opponent can do to stop you. Other uses for STR ability checks are often less crucial, but nice to have nonetheless.

Primal Champion: A fitting capstone for the Barbarian class, making you the tankiest tank who ever lived. If wearing medium armor, your Unarmored Defense may offer high AC when you reach level 20, so be sure to check both options.