In this post, we will be examining the Cleric’s Class Features and how you can optimize your Cleric through choosing your Race, Ability Score, Spells, Feats, etc. This article will focus primarily on content from the Dungeon Master’s Guide and Player’s Handbook, but will also delve into some of the content in the Sword Coast Adventurer’s Guide and Xanathar’s Guide to Everything. 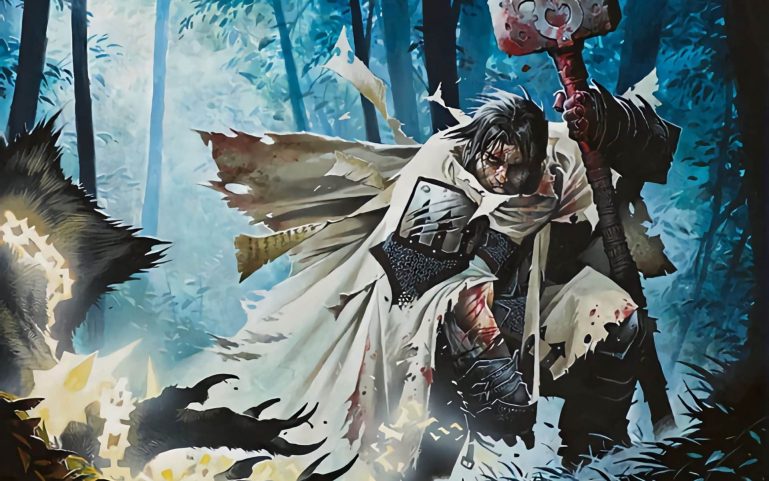 The color code below has been implemented to help you identify, at a glance, how good that option will be for your Cleric. This color-coding isn’t a hard and fast rule; there are plenty of sub-optimized options out there that will be viable to your party and will be fun to play.

So if you’re ready, pray to the deity of your choice, and don’t forget to heal your teammates!

When most people think about the Cleric class, they think of the quiet party member who heals those in need and throws some ranged spells around when no one’s hurt. While 5e’s Cleric can be like that, they can also be heavy armor wearing, mace wielding, summoning-lighting-bolts-with-one-hand-while-mass-party-healing-with-the-other…ers. Like Druids and Bards, Clerics are spellcasters that have a ton of versatility and a long list of roles they can fill.

The Cleric’s spell list has a definitive focus on healing and buffing your party members. Keeping everyone in the fight by healing or making them harder to kill is extremely valuable to any party.

After spellcasting, Domains are the Cleric’s biggest class feature. A Cleric’s Domain is a defining aspect of your character as they represent what your Cleric worships. Each Domain gives you bonus Domain Spells, unique abilities, and a bonus to damage with either spells or weapons.

Having a solid healer/buffer in your party is indispensable, although some might call it the “boring” job. While 5e Cleric builds can be varied and don’t have to necessarily focus on healing, your party may rely on you for support when situations get rough. Announcing you are playing a Cleric is kind of like announcing you will be the designated driver, your friends are likely to get themselves into a bit more trouble knowing they have someone to bail them out.

Apart from that, the biggest issue Clerics are likely to run into is that their spell list contains a lot of concentration spells. Concentration forces spellcasters to remain focused on a spell for the duration of its effect and will cause them to drop the spell if they take enough damage or cast another spell that requires concentration. If you’re not careful, you can end up wasting a spell slot or dropping a spell at an inopportune moment because of poor concentration management.

Clerics are a spellcasting class that uses WIS, so prioritize this. CON is important because you can’t heal your party if you’re dead, can you? Clerics can also be effective at playing the role of tank, so STR and DEX are useful depending on your build.

Dragonborn: The STR bonus is okay but the lack of WIS and CON makes this a suboptimal choice.

Dwarf: Dwarves are your stereotypical Cleric race. They get a CON bonus ensuring you will live long enough to heal your teammates.

Elf: DEX is good for initiative and light armor capabilities and Perception pairs well with the Cleric’s presumably high WIS score. No WIS bonus is the real downside here. Advantage on saving throws against being charmed and immunity to being put to sleep keeps you healing and buffing your party in dangerous situations.

Gnome: INT is useless for Clerics.

Half-Elf: The CHA bonus is largely unproductive for Clerics, but increasing two ability scores by 1 allows you to boost WIS and CON/STR/DEX to create a rather well-rounded character. Advantage on saving throws against being charmed and immunity to being put to sleep keeps you healing and buffing your party in dangerous situations.

Half-Orc: STR is good depending on the build and CON is always welcome. Relentless Endurance keeps you in the fight to save your friends. The lack of WIS hurts though.

Halfling: DEX is good for light armor Clerics and Lucky is always nice to have.

Tiefling: Tieflings don’t have any features that make them appealing for a Cleric.

Prioritize WIS over everything else. Make sure you have a solid amount of CON, then decide between STR and DEX depending on your armor and weapon choices.

CON: You need to be alive to heal your party members, and CON helps you achieve that goal.

WIS: Clerics cast spells with their WIS, so pump this as high as you can.

CHA: Clerics shouldn’t try to focus on social skills outside of WIS-based ones. If you must, the overall effectiveness of the character will suffer.

Hit Points: Clerics have a middle-of-the-road d8 hitdice. Better than the Sorcerer and Wizard, but the problem is that Clerics tend to be in the middle of the fray instead of in a ranged position. A decent AC paired with their powerful healing spells should mitigate some of this risk.

Weapon/Armour Proficiencies: Light armor, medium armor, shields, and simple weapons is enough to survive early on. Specializing in a specific armor and weapon type will be necessary to get the full mileage out of this class.

Skills: Clerics aren’t known for their diverse skillset. They can only choose two of the following five skills.

Spellcasting: Clerics cast their spells with WIS. Despite their ability to tank, they are considered a full caster class. 5e Clerics know, and can therefore prepare, any Cleric spell that they are of a high enough level to cast. If that wasn’t good enough, the spells in their Divine Domain of choice are always prepared for free. On top of their ability to prepare a great list of spells depending on what they are expecting that day, Clerics get access to ritual casting which is an awesome way to conserve spell slots/

With access to so many spells, and powerful ones at that, Clerics can give the Wizard’s diverse spell list a run for their money.

At 1st level Clerics get to choose their Divine Domain. A Cleric’s Divine Domain completely defines how the build plays, so choose your favorite and don’t look back!

Channel Divinity: Clerics are a good anti-undead character with this feature. Channel Divinity also comes with some great additional uses depending on which Divine Domain you choose.

Destroy Undead: More undead hate, but a weaker one due to CR limiting. There are ~20 undead creatures that can be forced to save or die right at 5th level and it just gets better from there. By 17th level,  there are close to 80 monsters that can be affected by destroy undead. One round of insta-killing a couple of undead baddies your DM has thrown at your party will make them think twice about which undead creatures they throw at you in the future.

Divine Intervention: An interesting class feature. If your creativity knows no bounds, Divine Intervention can be extremely cool. The effect is deliberately vague in the Player’s Handbook, so its true potential will be at your DM’s discretion. Once you reach level 20 this becomes the Cleric’s capstone ability. You won’t even need to make a roll, so expect your DM to reign in your craziest ideas. Still, it’s extremely flavorful and lets you flex your roleplaying.

Many feats aren’t suited to the Cleric Class, but we will go over the ones that you may consider. Since Clerics are a full caster class, maximizing their WIS to get the most out of spells should be a priority. This means that taking too many feats is usually a bad idea.

Clerics have access to a lot of spells. Therefore, we think it would be the most beneficial to only talk about our favorite spells at each level, and which ones to avoid. Just remember that this doesn’t mean the ones we don’t mention are necessarily bad or don’t have a purpose.

Enter our contest to win a $50 Reaper Miniatures gift card!

There are three ways to enter: