In this post, we will be examining the wizard’s class features and how you can optimize your wizard through choosing your race, background, ability scores, subclass, feats, and spells. 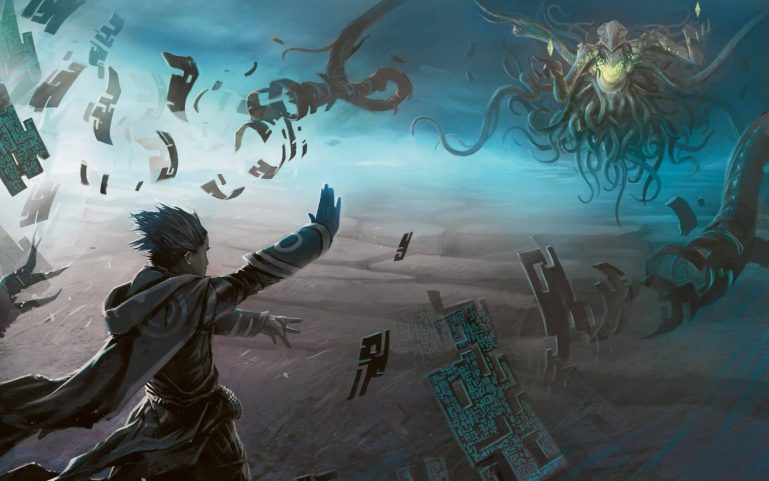 This guide is meant as a deep dive into the DnD 5e wizard. For a quick overview of other 5e classes, check out our Guide to DnD 5e Classes.

The color code below has been implemented to help you identify, at a glance, how good that option will be for your wizard. This color coding isn’t a hard and fast rule; there are plenty of sub-optimized options out there that will be viable to your party and will be fun to play.

So if you’re ready, grab your spellbook and cast fireball until all of your problems go away.

Wizards are spellcasters that have studied the fundamental forces of magic itself in order to weave it to their will.

Wizards are a class that relies on their INT to cast spells, outsmart opponents, and get themselves out of tricky situations. This reliance on INT will become apparent to players as they realize that they have to use their brain to manage a massive spell list and be the party member everyone relies on to always have a plan (thank Gandalf for setting that unrealistic expectation).

The wizard class is the epitome of a full caster. They have an unparalleled spell list that they can prepare spells from every day to ensure they are always ready for whatever situations may arise.

A wizard’s weaknesses are about what you would expect. They have very low AC and hit points and struggle with anything physical.

Dragonborn:
Dwarf: No INT is tough and the wizard won’t be tanking any time soon. Additional hit points are always helpful, especially with the meager d6 hit dice.
Elf: Elves get a DEX bonus which can somewhat help the miserable AC of a Wizard. High Elves get an INT boost and a free cantrip of your choice, as well as an extra language for your roleplaying needs.
Gnome: +2 INT is a great start for any wizard, along with Darkvision and Gnome Cunning.
Half-Elf: Not being able to pick up a +2 to INT is going to make the Half-Elf a tough go for Wizards.
Half-Orc: Wizards need INT to be effective.
Halfling: No INT for Wizards.
Human:
Tiefling: INT bonus subraces will work just fine with wizards, although +2 would be preferred. Access to more spells is never a bad thing, and you have the choice of which spells best suit your playstyle.
Water Genasi: Nothing here for a wizard.

Acolyte: Religion and Insight are already available to wizards but you do get two languages, and gaining shelter in certain places of worship can be handy.

Wizards need INT and nothing else is critically important.

STR: STR is not useful to a wizard unless they are going for a heavy armor build.

DEX: Wizards have a notoriously low AC so a high DEX is the best way to avoid getting hit. Most wizards use mage armor to pump their AC, which stacks with DEX. If you are going for a heavy armor build, DEX can be mostly ignored.

INT: This is the most important stat for the wizard, pump this as high as you can.

CHA: Leave this to other classes.

Hit Points: Wizards have a measly d6 hit dice. You can somewhat mitigate this by increasing CON since you only need to worry about INT as your main stat.

Proficiencies: No armor proficiencies and the weapon choice is barely worth mentioning. But you weren’t really hoping to swing a greatsword with your wizard, were you?

Skills: Unfortunately the wizard only gets to pick two skills.

Spellcasting: If you want to cast spells you’ve come to the right place. Wizards are the best at what they do. Wizards have a unique way of discovering and preparing spells via their spellbook. This book allows wizards to copy spells that they have found while adventuring, which allows wizards to know more spells than they get by simply leveling up. The downside of the spellbook is, if it is destroyed or lost, the wizards will be stuck with the spells they currently have prepared until they can find their book or create a replacement. Wizards also get access to ritual casting which is a great way to stretch spell slots if you have time to perform the ritual. Wizards can use an arcane focus as their spellcasting focus.

Arcane Recovery: One of the biggest challenges a wizard faces is knowing when to use important spell slots. Arcane Recovery makes the spell slot system a bit less punishing.

Optional Rule: Additional Wizard Spells: The expanded spell list offers new options for wizards but doesn’t feel like it diminishes any of the other classes. More options are usually a good thing and that is the case here.

At 2nd level wizards get to choose their Arcane Tradition. These options all have their own merits and playstyle.

The Bladesinger subclass provides everything you need to make an effective melee/spellcasting hybrid character. Not only is it loads of fun, it's also quite strong.

Chronurgy Magic Wizards can manipulate the flow of time and bend it to their will. The features this subclass gets access to are all useful and unique.

Graviturgy Magic Wizards can manipulate gravity and bend it to their will. Not as powerful as Chronurgy, Graviturgy is still quite flavorful with some interesting abilities.

An Order of Scribes wizard excels at learning new spells and is at its best when it has a huge spellbook to pull from. If you want to play this subclass, make sure you have a plan on how you will get access to lots of gp and spells to copy.

The School of Abjuration is a powerful and easy-to-use wizard subclass that focuses on the defensive aspect of spellcasting.

The School of Conjuration is all about summoning creatures and objects.

Experts in seeing into the future, divination wizards use their abilities to manipulate the battlefield

Check out our School of Divination Wizard 5e Guide for build optimization tips.

As the name implies, wizards in the School of Enchantment can enchant people and monsters to obey their commands.

School of Evocation wizards like to blast their enemies with big flashy elemental spells. If want a straightforward damage-dealing mage, this is the one for you.

The School of Illusion focuses on deception through illusion magic. This subclass requires the most creativity to be effective, as well as a DM that sometimes lets you get away with silly ideas.

The School of Necromancy is all about commanding undead creatures but doesn’t offer too much beyond that.

School of Transmutation Wizards can transform materials at will, manipulating matter into whatever they see fit. Unfortunately this school is relatively weak compared to other wizard subclasses and doesn’t do much to differentiate itself from a regular wizard.

War Magic wizards are great at keeping themselves in the fight and holding up powerful concentration spells as long as possible.

Optional Rule: Cantrip Formulas: It’s great that wizards can finally replace their cantrips. Sometimes you pick a cantrip because it sounds cool only to discover you don’t need it at all. This completely negates that and is a perfect addition to the class.

Spell Mastery: Choose a 1st- and 2nd-level spell to make into a cantrip. This is an extraordinarily powerful ability, especially when combined with reaction based spells like shield or silvery barbs.

Signature Spells: This is like an enhanced Spell Mastery, allowing you to prepare two extra 3rd-level spells each day and cast them at 3rd-level for free. It’s best to choose spells that can be upcast for the ability, to stretch its efficiency to the max.

Another thing to take into consideration is the additional class’ primary ability scores. Ideally, you want to use the Wizard’s high INT to synergize with the additional class, but there is only one other class that uses INT to this extent (the Artificer). That said, multiclassing will work with classes that use a different primary ability score and can help smooth over some of the Wizard’s weaknesses.

Be warned though, Wizards are possibly the best single class build on their own. Dipping into another class delays or locks you out of very powerful spells at higher levels.

Artificer: This is the obvious choice since Artificers are also INT-based casters. Artificers open you up to medium armor and shields, giving a significant boost to AC. Take at least two levels of Artificer to get access to Infuse Item, or three if you want to gain an Artificer Specialist, of which Artillerist or Battle Smith would make the most sense. Taking more Artificer levels is not advised as it will delay gaining higher level Wizard spells too much. However, as a full caster, multiclassing into Artificer will not slow down your spell slot progression.

Cleric: A classic option is to take one level of Cleric to get access to medium/heavy armor, shields, and a whole host of new spells including powerful healing options.

Fighter: Taking one Fighter level gets you access to a massive amount of weapons and armor, as well as shields. The Defense Fighting Style can also help stack AC even higher, making you much more durable and making it easier to maintain concentration. A second level of Fighter gives you Action Surge, allowing you to potentially cast two spells in a turn, creating the opportunity for some powerful combos.