In this post, we will be examining the warlock’s class features and how you can optimize your warlock through choosing your race, background, ability scores, subclass, feats, and spells. 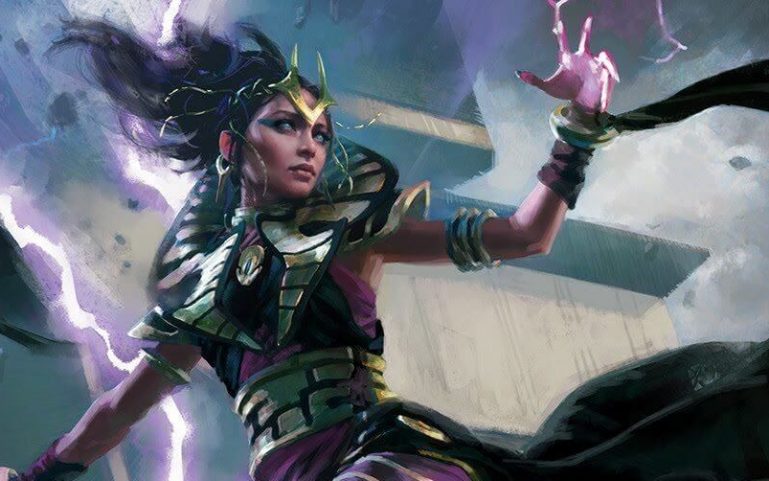 This guide is meant as a deep dive into the DnD 5e warlock. For a quick overview of other 5e classes, check out our Guide to DnD 5e Classes.

The color code below has been implemented to help you identify, at a glance, how good that option will be for your warlock. This color coding isn’t a hard and fast rule; there are plenty of sub-optimized options out there that will be viable to your party and will be fun to play.

So if you’re ready, give some props to your patron and prepare for a lot of eldritch blasting.

Warlocks get their powers by dedicating themselves to an eldritch being. These beings tend to be on the dark side, so your character might have a tough time getting along with a party’s lawful good paladin or religious cleric. This devotion to an eldritch being comes with a fair share of issues, so you may find yourself in tough situations where your party is wanting to do one thing but your Eldritch Patron wants another.

Warlocks are not area of effect blasters like the evoker wizard or a sorcerer. Instead, they have a few major defining aspects – Eldritch blasts, Curses, and Mind Control.

The Warlock is a half-caster class, meaning they only learn up to 5th level spells, with the exception of their Mystic Arcanum. Unlike the other half caster classes, they are built entirely around casting spells and have a couple of quirks about their spell caster that makes them a very unique caster.

First of all, warlocks are CHA-based casters. Secondly, they have a very reduced number of spell slots and can only ever cast spells at their highest level. This means that all of your spells are going to pack one hell of a punch with the caveat that you will run out of spells slots quite easily.

One good thing to note about this is that warlocks regain all of their spells slots with a short rest, so with as little as one hour of downtime warlocks can be back at full offensive strength.

Warlocks also have a number of passive abilities called Eldritch Invocations. A staple invocation called Agonizing Blast allows warlocks to add the CHA modifier to their best damage cantrip, eldritch blast. These invocations make warlocks one of the most customizable classes out there and provide a number of different playstyles.

A warlock’s spell slots are its biggest weakness. Up until 10th-level they only have two spell slots per short rest, and only ever get up to four spell slots at the 20th-level. This means that warlocks can wind up without any spells very quickly if your party runs into trouble.

This, combined with the fact that warlocks don’t get a ton of other combat-focused abilities (outside of the Hexblade subclass), means that a warlock’s resources can get used up pretty quick and they become very reliant on cantrips.

Dragonborn:
Dwarf: No CHA is tough and the warlock won’t be tanking any time soon, even if they choose Pact of the Blade. Additional hit points are always helpful.
Elf: Elves get a DEX bonus which can somewhat help the AC of a Warlock. Proficiency in Perception and having Darkvision is useful.
Gnome: Warlocks need CHA to be effective, of which there is only one subrace.
Half-Elf: The +2 CHA, ASI, and skill versatility make this is one of the better races for the Sorcerer class. The Half-Elf Drow subrace is great because it provides a couple of useful Warlock spells and won't make you burn any of your precious slots for them.
Half-Orc: Warlocks need CHA to be effective.
Halfling: Only a +1 to CHA will make Halflings a tough choice for Warlocks.
Human:
Tiefling: Warlocks excel with CHA, so any of the subraces will do fine.

Warlocks need CHA and nothing else is critically important.

DEX: Warlocks get proficiency in light armor so pumping DEX is the best way to increase AC.

INT: Dump this stat for sure.

CHA: This is the most important stat for the warlock, pump this as high as you can.

Hit Points: A d8 hit dice, lack of healing spells, and low AC make the warlock’s survivability something to be desired.

Saves: CHA saves are only really present at higher levels. A proficiency in WIS saves helps mitigate the fact that WIS is a dump stat for most Warlock builds.

Weapon/Armour Proficiencies: Light armor and simple weapons is likely good enough for your warlock. Pact of the Blade gives you automatic proficiency with the weapon you conjure and the Hexblade Patron gives you medium armor and shields.

Skills: Unfortunately the warlock only gets to pick two skills from their not-so-good Skill pool:

Pact Magic: Pact Magic is a totally unique mechanic for warlocks. Essentially you have a very limited pool of spell slots and you can only cast spells at their highest level (For example, a 5th-level warlock has 2 Spell Slots and always casts them at 3rd level). The good news is that your very limited spell slots recharge on a short rest, the bad news is that if you don’t get short rests very often you will become reliant on cantrips.

Otherworldly Patron: Like clerics and sorcerers, warlocks get to choose their subclass at 1st-level.

Channel your powers through a weapon summoned from the plane of shadows.

The Archfey Warlock focuses on using the glamor and magic of the fey to ensnare the senses of enemies.

Channel the power of an entity of the Upper Planes into divine healing energy.

Draw power from the crushing, dark cold of the deepest oceans.

Summon the power of the Nine Hells to smite your enemies with fiery dark energy.

Make a deal with a genie to gain access to elemental abilities and the genie’s infamous wish-granting powers.

The Great Old One

Draw upon the unfathomable power of eldritch beings to drive your enemies insane.

Break free from the circle of life and death by channeling the power of a patron who exists beyond death’s veil.

Gain mastery over death with the help of an unnaturally immortal patron.

Pact Boon: The warlock’s Pact Boon is a versatile feature that allows you to choose a build-defining trait. This type of class feature, that allows choice between core class features, is quite unique to the warlock.

Mystic Arcanum: Nice way to boost the spell slots your warlock has access to. Choose a spell that doesn’t scale with levels. See the Spells section to get suggestions on good Mystic Arcanum spells.

Eldritch Master: A minute is 10 rounds of combat so this isn’t useful if you’re in a fight. If you can find a minute between fights, you can usually find 60 minutes to do a short rest. This is a disappointing capstone ability.

Check out our guide to Eldritch Invocations.

As they only get a maximum of 4 spell slots at 20th level, warlocks are feast and famine spellcasters. If they aren’t able to short rest between encounters, they will quickly have to resort to eldritch blasting their opponents. This might not feel bad from a damage output perspective because eldritch blast is the most powerful cantrip in the game. That said, it can certainly make for dull gameplay when you’re just using the same cantrip turn after turn. Luckily, there are some magic items that can somewhat help with spell slots, like the rod of the pact keeper.

Multiclassing is always an opportunity cost, you have to determine if taking a level of another class is worth what you will lose from the original class. Many factors come into this decision, with the main factor being how long your campaign will run and, ultimately, what level you will be playing until. Warlocks are notoriously good options for multiclassing. They get their subclass features at 1st-level, get access to spell slots that recharge on a short rest, have a common spellcasting modifier, and their invocations and pact boon can be very helpful for a number of builds.

Paladin: The Bladelock is a notoriously broken multiclass option. If you dip 1 level into Warlock and put the rest into Paladin you will be able to take the Hexblade subclass and attack using your CHA modifier. This means allows you to make your Paladin a lot less Multi-Ability Dependant as you can take 13 in STR to get heavy armor, max your CHA, and put the rest into CON.

Sorcerer: A three-level dip into Sorcerer gets you access to metamagic which will allow you to quicken, guiding bolt, or twin your Eldritch Blasts, which will net a ton of damage.

Fighter: Getting access to all armor and shields will help with the Warlock’s lackluster AC. The Fighting Style helps boost AC even further and Second Wind is decent healing. Most Warlocks can stop there, but Hexblades can continue all the way to a three level dip to get access to Action Surge, and a Martial Archetype. Thematically and mechanically, the Echo Knight is the way to go, but the Battle Master, Psi Warrior, Samurai, and Rune Knight are all good choices.