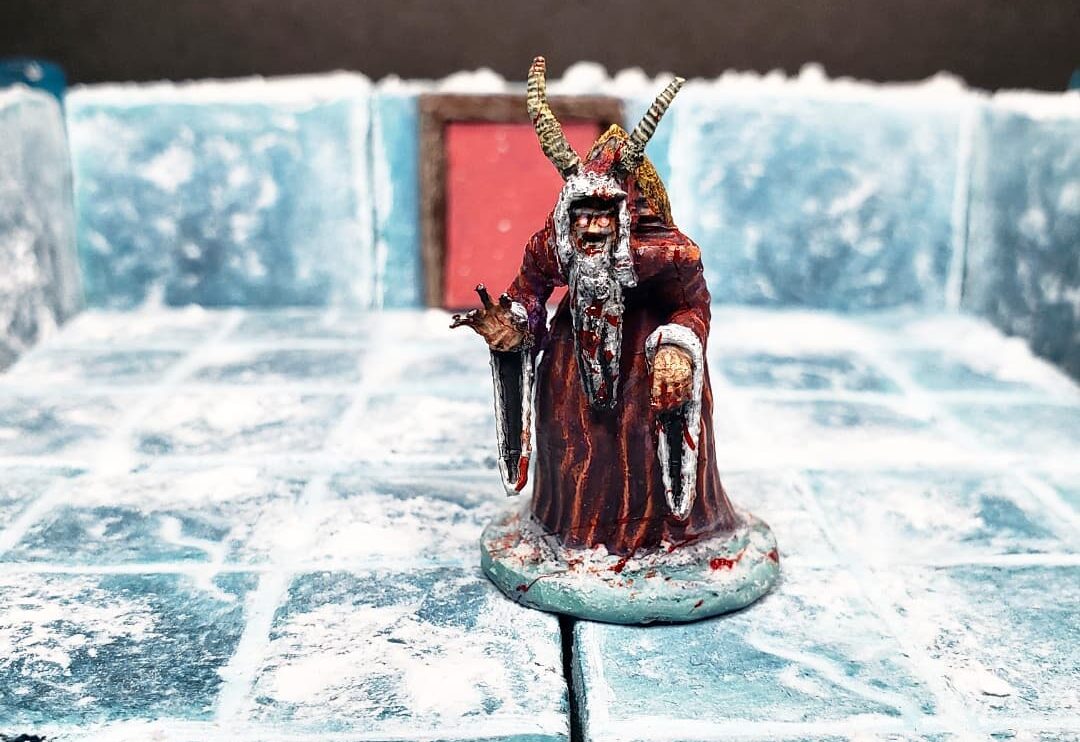 This adventure is inspired by a puzzle found in Tasha’s Cauldron of Everything and is meant for a party of four or five 13th level adventurers. The riddles provided to the party require a suspension of disbelief in the sense that the player characters should know about Christmas and some other real-world traditions and tales. Essentially, have them act like their current knowledge of Christmas is the knowledge that their characters have.

If your party is having fun or successfully completes the puzzle without running into Krampus, consider throwing Krampus at them anyway to pad the session length and have some laughs.

Based on playtesting, this adventure can take 1.5 hours if the party answers all of Jack’s riddles (and fights Krampus anyways) and up to 3 hours if they encounter the dangerous beasts in Krampus’ Lair plus Krampus as a final boss.

This adventure leads your party through Krampus’ lair, which is full of dangerous Christmas-themed creatures. The walls, ceilings, and floor of Krampus’ lair are made of ice and can’t be melted or destroyed. No vision can penetrate the ice, and only Jack Frost can lead the party through the maze alive. The ice on the floor is covered in snow, thus providing proper footing.

A series of clues provided by the party’s guide, Jack Frost, give hints on how to get through the area safely.

Jack Frost (Winter Eladrin) is friendly, and he can only speak the truth because of a curse placed upon him by his boss, Krampus. The curse doesn’t allow Jack to mention the name of his boss, nor any information as to where they currently are. When he meets the party, Jack will do his best to convince the party that he means no harm, which the party can confirm with a DC 10 Wisdom (Insight) check.

Jack appears jovial and nonchalant, but a DC 15 Wisdom (Insight) check can determine that he grows increasingly nervous as the party gets closer to meeting Krampus.

Krampus’ lair consists of a series of identical rooms made entirely of ice. Each room has four doors, one at North, South, East, and West. The doors are wrapped like presents and only Jack’s cane, inserted into a small hole in the middle of the door, can open the doors. If the cane is taken from Jack, it loses all of its magical properties.

Once opened, the doorway shows only magical darkness until the party steps through, at which point they see an identical room to the room before. Once all members of the party enter the room, all of the doors shut and magically lock until Jack provides access to the next room.

The riddles provided by Jack will help the party navigate the icy maze. Each of the answers to the riddles start with either N, S, E, or W, denoting which door is the correct direction. The correct route to escape Krampus’ Lair is West, South, North, South, South, North, East.

Even though the path mentioned above leads the party through rooms they have “already encountered”, these are in fact entirely new rooms because of the twisted magic of Krampus’ Lair.

Wisdom (Insight) DC 15. After Jack says “my riddles will help provide direction”, they catch on to the fact that there are doors leading to each of the cardinal directions.

Wisdom (Insight) DC 20. After telling Jack to open an incorrect door, any party member can make an Insight check if they say they are specifically looking at his expression. If they succeed, they will see a hint of nervousness wash over his face. This can only be used once as Jack will notice and force a smile for the rest of the encounter.

You find yourselves in a 20-foot high by 20-foot wide room. The walls are made of opaque ice, and snow covers the ground. There are four doors set into the walls. They appear to be wrapped up like presents.

Suddenly, a humanoid with blue skin, white hair, and a tailored blue sparkly suit appears in front of you with a soft “pop”. He holds a glowing cane of red and white swirls against his shoulder and has a broad smile across his face.

“Why, hello there! My name is Jack, Jack Frost. It seems you’ve stumbled across my boss’ lair. He’s quite a grump at this time of year so it’s best to avoid running into him if at all possible. I can help you out of here if you can figure out my riddles but, keep in mind, there are nasty beasts that lurk these halls so be careful not to make a wrong turn.

I am bound by my master to not directly tell anybody how to get out, but my riddles will help provide direction.”

Riddle: What decoration made of berries and pine, is shaped like a donut and makes doors look divine?

Encounter (if they guess wrong): 4 Wreath Snakes (Giant Constrictor Snake). These snakes look like giant unraveled wreaths and do their best to strangle the party with their cedar scented bodies.

Riddle: Where does Frosty the Snowman keep his money?

Riddle: If the end of the year is on December 31st, then what is the end of Christmas?

Encounter (if they guess wrong): 2 Ghosts that try to possess the party and make them accomplish their New Year’s resolutions of killing their party members.

Riddle: Which constructs are said to be activated by enchanted accessories?

Riddle: How do you say Christmas without the letter after K?

Encounter (if they guess wrong): 3 Yetis that hate puns.

Riddle: First start with a chest, full of flowing gold treasure. It needs to be kept warm when out in cold weather. Then, something we say when we disagree. This powerful word makes most solicitors flee. Last, what comes first when baking a mean ginger treat? It’s found in an angel and it’s the first thing you greet. Stir all them together, now what do you think, the sum of its parts you’d be willing to drink?

If the party takes 3 wrong turns, Krampus will appear and try to kill the party for being naughty. Krampus is a terrifying creature with half-goat, half-demon features. He is 10 feet tall, has grey skin, large ram’s horns, and goat feet. He wears tattered red clothing with white fur trim and carries a dirty, stained sack on his shoulder. He has the following stats:

Presents. Krampus reaches into his magical sack and throws three of the following magical presents at random (reroll duplicates), choosing one to three targets it can see within 120 feet of it:

Hoof Slam. Krampus makes one Hoof Slam against a creature within range.

Once the party has defeated Krampus, Jack Frost will show the party which doors allow them to leave the maze and the party can escape!

Hope you liked the adventure!

Check out our D&D Christmas article if you’re looking for more Christmas D&D adventures and ideas!