We recently had the pleasure of talking to one of our favorite content creators in the world of Dungeons & Dragons, Ross McConnell. For those who don’t know, Ross is the founder of 2-Minute Tabletop, a website where he shares his hand drawn fantasy maps and map assets for tabletop RPGs. 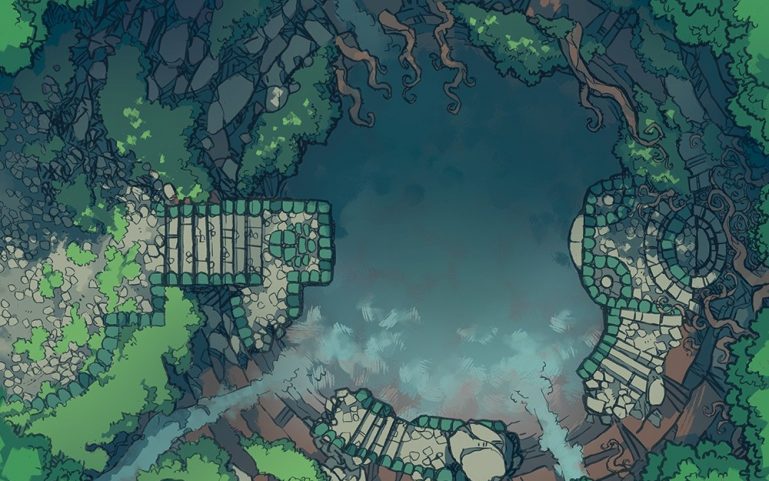 Ross now draws maps full time, combining his creativity, knack for visual design, and unique artstyle to create maps that we absolutely love! With over 200 maps and assets to choose from, he has built up an impressive library of tools appropriate for any campaign. To top it all off, they can easily be printed to use at home or integrated into your preferred virtual tabletop such as Roll20 or Fantasy Grounds.

Thank you so much to Ross for chatting with us! If you like his work, please consider supporting him on Patreon or purchasing map packs and assets from his website to help him continue to put out his amazing content.

Tell us about 2-Minute Tabletop. How did it start?

About five years ago my friends and I were really getting into tabletop role-playing (then it was Pathfinder) and I was the sole GM running almost every week.

Being a lifelong hobby-level artist, my main tool to immerse them was always little sketches and handouts. More than anything I would spend time drawing battle maps, as (being very new players) we spent so much time in combat.

I shared some of these maps on Reddit and they were really well received. I shared a few more and got even more good feedback. A little while later I set up my website and kicked everything off, and it’s been chugging along ever since!

How and when were you introduced to Dungeons & Dragons?

I took something of a gap year and travelled around Canada with a buddy of mine. We’re both from a part of Australia where, up until very recently, TTRPGs were basically unheard of. Somewhere along the way we learnt about D&D and were enchanted by the idea. Still on the road we bought some graph paper and tried to learn the rules together.

Back then we played Pathfinder since we were travelling on a strict budget and had no room for books, but we jumped over to D&D when 5th Edition came out and haven’t looked back!

2-Minute Tabletop is an inspiration for many. You have a massive presence on Reddit and your following on Patreon suggests that you are one of the all time greats of battle mapping. Did you ever think it would become this big?

I still don’t consider myself all that big! I’m just one artist who is still daily trying to develop my art style. I’m so grateful that so many people enjoy and support me along the way! I know that I’ll never “arrive” or feel like an “all time great” in anything, which is probably a good thing. I’m happy to just keep pushing my craft and chasing new heights.

What are the necessary tools and exercises for a beginner creating battle maps from scratch?

I touched on it in my last answer, but the important thing is (until you reach a level of skill you’re content with) to continually push your skills and try new things. All that an art style is is a collection of techniques which you have once tried out and then adopted. But, I suppose that is more for intermediates…

If you are truly just starting out then I have a YouTube channel which can teach you some “how to draw X quickly and easily” videos. Think of these as the foundational skills from which to experiment and develop that art style I mentioned. Figure out a basic way to draw trees, walls, and all those things we need in a battle map, and then strike out and search for your own unique take.

What does your process from inception to completion of a battle map look like?

It starts with an idea, goes through a drafting stage, and then lines, color, and exporting.

I find ideas in video games, media, hiking, and just about anywhere and everywhere else. I’m always jotting down ideas, and recently I have an endless list of suggestions to draw on too!

The next step is something they hammer into you in art class: thumbnails. I’ll sketch out a few different layouts and think about how I want to make the map tactically interesting by introducing elevation, obstacles, and things like that. I also just try to give the map a visually appealing form altogether.

The next steps are actually MAKING it. I’ll ink over my draft with pen and paper, scan it into my computer, and color it in Photoshop. I work in layers that keep things flexible and easy to tweak later, and often I only settle on the final colors after six hours of coloring, which in itself usually takes an hour or more. After that I export it all in such a way as to keep it easy to print or use digitally, which is a whole thing of its own.

2-Minute Tabletop has a unique, hand drawn feel to it. How did you land on this style?

This style is just the way I used to fill my textbooks with when I should have been taking notes at school! I’ve been “doodling” all my life and my earliest maps sprung out of it. When Reddit said they liked it (back in the early days) I decided to stick with it.

Since then it has come a long way but still keeps the interesting characteristics of actual pen on actual paper.

What do you personally draw inspiration from when coming up with battle maps? Are there any books/movies/games that you find yourself coming back to for inspiration?

When I play video games I OFTEN find myself spending most of my time running around and taking screenshots to later use as reference material. If I like a certain pavement brick pattern, screenshot. If I like the furniture arrangement, snap. I keep a large, chaotic library of such reference images and, though I don’t copy any 1:1, I pick and choose elements I like to create something new, which is how all art tends to work!

My greatest influences probably come out of the Zelda series and the Studio Ghibli films. After those, the Witcher series and probably a large portion of World of Warcraft. I also am attracted to historical sites in my real-world travels and constantly draw upon those memories and photos!

Where do you think battle maps are going from here? We already have online play (Roll20 and Fantasy Grounds) and online battle map creators (Inkarnate, Pyromancers, DPS, Arkenforge, etc.). What’s next?

I think people are attracted to artsy battle maps because of the atmosphere or immersion they offer that a marker and battle mat don’t. If it is about immersion, then I think virtual or augmented reality might be a likely development when they become more accessible.

I can kind of imagine tools like Tabletop Simulator becoming more mainstream and more 3D elements coming into play, like Divinity: Original Sin II’s level editor. If you could have those tools in a Roll20-like website I think that would become THE way to play online.

Have you found that your skill in making battle maps has translated to anything outside of TTRPGs?

Hmm, that’s a good question! I don’t actually use my artistic skills for anything else these days, so the connection is a loose one, but it gives me a fun thing to muse on when I’m out and about and would otherwise be bored. When I’m waiting for a train I find myself visualizing it as a battle map, and when I’m out hiking I’m always noting how grass grows over a ledge or how a creek has shaped the land.

I think any artist will tell you the same thing, really! It gives you an endlessly entertaining lens to look at the world through, and lets you appreciate a scene on another level.

You mention in your videos that you DM. Do you prefer in-person or online?

My players know me for this but I always always – with the exception of being in the midst of pandemics – try and meet in person!

I do so because it’s still convenient for us and I know it won’t always be the case, and because everyone is more engaged when at the table. We’re also a loud bunch and it’s much easier to comprehend people in person compared to when two mic feeds are overlapping. Finally, all those hand gestures of mine are useless online!

That really is just my preference though and I can foresee us going permanently online as we go our separate ways. Currently we’re playing almost weekly on Roll20 and it’s going great.

What are some of your favorite “house rules”?

My personal favorite is called “The One Death & Dismemberment Table to Rule Them All” and replaces 5e’s whole death system with a highly random set of tables to determine exactly where that sword hit you and how badly.

Based on your die roll it might be a near-miss that lets you off the hook or your head might sail off. Consecutive blows give you compounding disadvantage, so you really want to keep from hitting zero hit points.

I justify it in-game as hit points really being your vitality, or skill, or luck, or something like that. The arrow that dealt 12 damage to you was really a near-miss, but you don’t want to press your luck! After five such arrows one might just find its mark, and it could be your arm or it could be your heart…

Using this system results in a lot less simple death and a lot more grizzled heroes forced into retirement by their wounds. Alternatively, adventurers might push on with injuries that could be mended or they can afford to have. Our bard lost his leg in a cataclysmic boss fight and now has a badass enchanted puppet-prosthetic. Our paladin retired and became an influential NPC who plods around with a cane.

It’s a fun addition that lets characters stick around and continue to partake in the story, and my players know that if they REALLY want to play that paladin again then there are ways to mend him. Then again, I have always loved very flawed characters and it’s not for everyone. Heck, it’s not even for everyone at my table!

Once again, thanks so much to Ross at 2-Minute Tabletop for popping in to answer our questions!