The highly anticipated, space-faring Spelljammer setting is coming to D&D 5e. We talk about what has been confirmed and what implicatoins it may have for fifth editions version of Spelljammer. 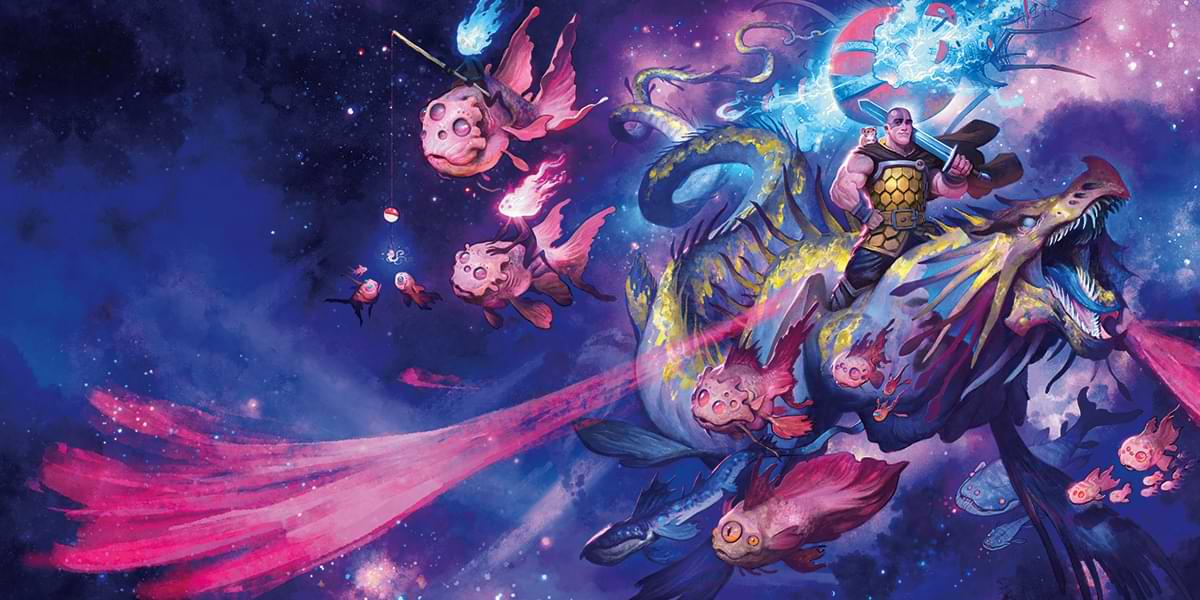 What is Spelljammer in D&D?

Spelljammer is a D&D setting that was released for the second edition of D&D and features a unique takes on a sci-fi/fantasy crossover. Fans fell in love with Spelljammer for the space-faring nautical ships–named spelljammers–and the unique creatures that could be encountered during travels to Wildspace.

Spelljammer for fifth edition has long be sought after by fans who enjoyed the second edition setting, or by those that want a more sci-fi take on D&D. The Unearthed Arcana, Travelers of the Multiverse, on October 25th, 2021 all but confirmed that Spelljammer was coming to fifth edition, it was just a matter of when.

During Wizards of the Coasts D&D Direct on April 21st, 2022, it was confirmed that we can expect a Spelljammer setting to hit shelves on August 16th, 2022. But wait, there is much more to that announcement that we will cover below.

There are a number of layers to the Spelljammer announcement. Below, we’ll compile everything that was announced in the D&D Direct and other official sources.

On August 16th, 2022, Spelljammer: Adventures in Space will be flying in from Wildspace. This product is quite unique when compared to any fifth edition product offered by Wizards thus far. Spelljammer: Adventures in Space will consist of three 64 page books, a DM screen, and double-sided poster map. The books contained in this collection are as follows:

This book will contain all of the character options for players and setting information for DMs. At the moment, the book contains:

Bestiary of 60 new space-dwelling monsters for the Spelljammer setting:

A Spelljammer adventure that takes players from levels 5-8. The adventure will be set in Wildspace and the Astral Sea. Including the Astral Seas as part of this setting is interesting and seems to be replacing phlogiston in the fifth edition’s version of Spelljammer.

While this announcement comes with a huge collective sigh of relief from fans of the setting, there is one thing that may take away from the celebration. This collection will be priced at $69.99 USD / $91.99 CAD, which makes it the most expensive setting to date. This puts it at about $20 more than a similar offering in Strixhaven: A Curriculum of Chaos. To further reduce the hype, even though there will be three books released as part of this project, the final page count will be 192-pages, 32 pages less than the comparable product of Strixhaven: A Curriculum of Chaos.

That said, including a poster map and DM screen certainly makes the offering more palatable. Unfortunately for fans that don’t need the map or screen, there won’t be an opportunity to purchase the collection without the bells and whistles. There will also be a free prequel Spelljammer adventure that, considering the price of Spelljammer: Adventures in Space, isn’t exactly free.

This free prequel adventure will be launched in July and will be free to everyone with a Wizards and D&D Beyond account. There hasn’t been any information released about what this adventure entails, but this is certainly a first from Wizards and seems like solid way to generate hype about Spelljammer: Adventures in Space releasing the next month.

The Wizkid miniatures that have been announced for Spelljammer give us another couple of monster reveals, including:

Wizards of the Coast is bringing back the Monstrous Compendium series! The first edition, titled Monstrous Compendium Volume One: Spelljammer Creatures will feature 10 new monsters and will be available for free for anyone with a D&D Beyond or Wizards account. There will be 5 new and 5 returning creatures, they are listed below:

Get Ready to Blast Off!

What are you most excited for when Spelljammer comes to the fifth edition? Let us know in the comments!