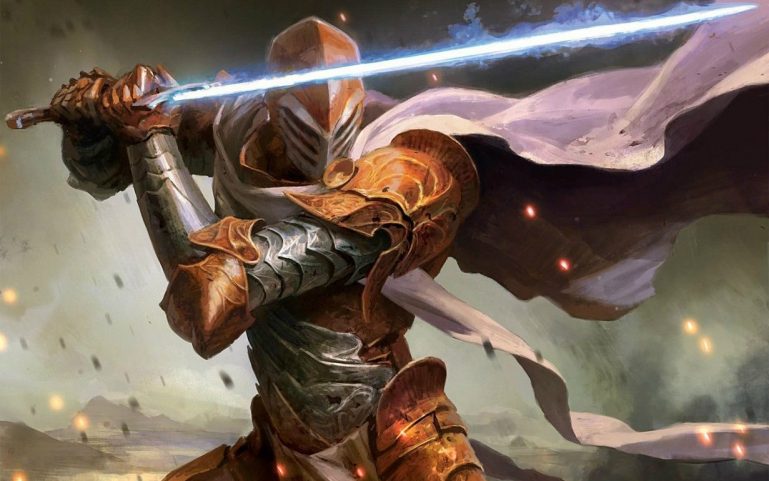 This guide is meant as a deep dive into the Eldritch Knight Fighter subclass. For a full overview of the fighter class, check out our fighter 5e Guide.

For our full class guides, we use the following color rating scheme:

For our subclass guides, we focus mainly on the Blue and Sky Blue options, because the other options are discussed in the parent guide or other subclass guides. We also discuss options that normally would be good for a typical build, but underperform when used in a subclass.

What is an Eldritch Knight?

Eldritch Knights are Fighters that gain access to the subtle arts of spellcasting. Much like Rangers and Paladins, Eldritch Knights are semi-caster classes, but they only gain spells slots up to 4th Level. They are limited to the Wizard’s spell list and can usually only cast abjuration and evocation based spells.

The Eldritch Knight’s gains access to the best defensive spells in the business: Shield, Absorb Elements, Blur, Mirror Image, etc. are all extremely effective ways to help your heavy armored Fighter avoid getting hit in combat.

Your spells also afford your some versatility in combat, which can help mix up your options and make the character more fun to play.

Eldritch Knights can offset this downside by exclusively using spells that don’t require a spellcasting modifier. While this is the optimal way to play and Eldritch Knight, it decreases their versatility in things such as crowd control or out-of-combat utility.

Another limitation of the Eldritch Knight is their reliance on the War Caster feat, especially if they are planning on going for the “sword and board” style that is focused on in this guide. If you plan on using a shield, you will need the War Caster feat in order to ignore the somantic components of the spells you cast.

Despite being an INT based semi-caster, we will be not be prioritizing the INT stat in favor of STR and CON for reasons explained above.

There are viable DEX based Eldritch Knight builds, but we are sticking with the one true purpose of Eldrtich Knights: get our AC as high as possible. To do this, you need full plate. To wear full plate, you need STR.

Dwarf: +2 CON and a free resistance to poison. Eldritch Knights are very interested in this.

Dragonborn: +2 to STR is beneficial for Eldritch Knight, but the +1 to CHA is wasted. Breath Weapon is also a nice AoE attack that scales with character progression.

Half-Elf: Half-Elf is a solid choice to take for your Eldritch Knight. Being able to boost STR and CON leaves you with solid starting ability scores and the resistance to charm/sleep and Darkvision are both super useful.

Half-Orc: Half Orc’s get you +2 STR and +1 CON. Dark-Vision is nice, proficiency in Intimidation will help you with helping in social situation, Relentless Endurance is a nice bonus, and Savage Attacks is just plain savage.

Variant Human: get to boost to STR and CON and any of the numerous awesome feats for EK. One thing with the Vuman feat is you will be unable to take Warcaster because, RAW, you need to be able to cast at least 1 spell before you can take the feat.

For this section, due to the sheer number of backgrounds available, I am simply going to list the most useful Fighter Backgrounds.

CON: Fighters are a tanking class. Eldritch Knights specialize in mitigating getting hit but when you inevitably get hit, you will want a high CON score to help soak damage.

Fighting Style: This choice comes down to the question, “do I want to maximize my AC or do a bit more damage?”

Second Wind: 1d10 + Fighter level as a bonus action is certainly a great feature for someone who is going to be in the middle of most fights.

Spellcasting: Most of the time you’re going to be using your spell slots for reaction-based defensive spells (like Shield and Absorb Elements) until you get to 13th level and you’re able to pick up Fireball. These spells are a great way to make your Fighter more versatile in combat. We will be covering which spells are best to grab in our Spells section below.

Weapon Bond: Never being without your weapon is a great thing, even outside of combat situations.

Extra Attack: At this point, until 7th Level, Booming Blade and Green Flame Blade do not do as much damage as taking 2 attacks.

War Magic: This bring the effectiveness of Booming Blade and Green Flame Blade back online because you get the bonus action attack when you cast a Cantrip. This means that you can use your action to cast the BB or GFB cantrip in which you get your first attack, then attack again with your bonus action.

Depending on your setup, it can even be superior to your three attacks at level 11.

Eldritch Strike: This is an absolutely amazing tool to help Eldritch Knights overcome their low INT modifier. Disadvantage takes on average -5 to a roll, so at this point, if you hit a creature with your weapon the turn before, you essentially have a +5 to your INT for the sake of casting a spell that causes a saving throw. This makes spells like Banishment much more viable starting at this level.

Arcane Charge: This essentially gives you another turn (minus the bonus action) that you can use at will and regain after a short rest. This fact that the teleport allows you to navigate the battlefield unimpeded makes this especially effective.

Improved War Magic: By 18th level, you are outputting a ton of damage with your melee attacks. However, when you can hit with an a spell like fireball and keep attacking, you can easily outpace your damage from attacking normally.

We cover the best feats for Fighters in our 5e Fighter Guide, the only changes would be:

If you are going for an optimal build, Eldritch Knights shouldn’t typically rely on damage spells or spells that give the creature a saving throw. This is because you will be able to continue to drop INT while focusing on STR and CON. Spells marked with an asterik (*) are outside of the abjuration and evocation schools of magic. These can be learned at 3rd, 8th, 14th, and 20th level.