A Player’s Guide to Skill Checks in DnD 5e

Skill checks are a massive part of DnD 5e, both in combat and outside of combat. Are you using your character’s skills to the fullest? 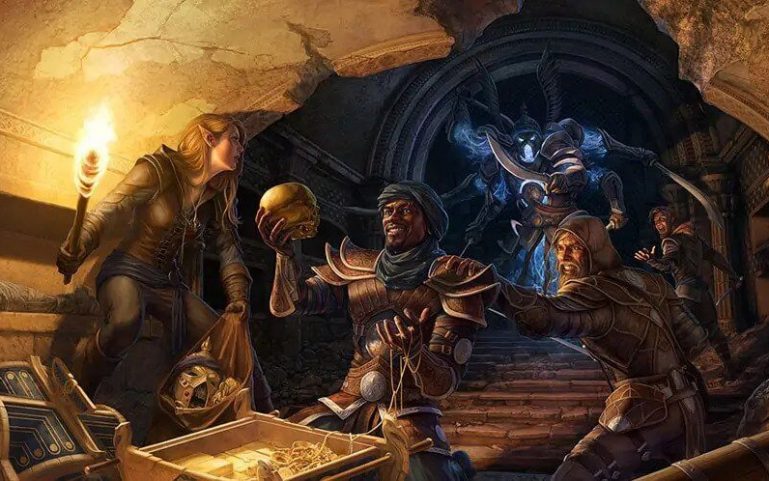 What are skill checks?

In the 5th Edition of Dungeons and Dragons, a character’s ability to remain unseen, persuade a storekeeper to lower their price, or jump long distances are all reliant on skill checks. There are 18 skills in DnD 5e and they are broken down into subsets of different Abilities:

Making a skill check is something that should always be left up to the DM. If you want to roll an Insight (WIS) check against an NPC you think is lying, phrase your request as “can I tell if he is lying about X?” instead of “can I make an Insight check?”

How to make a skill check in DnD

When a skill check is called for by the DM, players roll a d20 and add any relevant ability score and proficiency modifiers. If, for example, the 1st level fighter from the Starter Set was asked to make a Strength (Athletics) check, they would add +5 from the STR ability modifier and +2 from their Athletics proficiency to the d20 roll.

Skill checks have a specific DC (difficulty class) that must be reached or passed in order to succeed in the skill check. These DCs are determined by the DM.

Are skill checks the same as saving throws?

While skill checks and saving throws are similar, they have significant differences. Saving throws are exclusively made in response to dangers threatening the creature, these dangers can be from a huge variety of things like falling rocks, an enemy’s spell, or poison. Saving throws are only made on the primary ability scores (Strength, Dexterity, Constitution, Intelligence, Wisdom, and Charisma), so skill proficiencies don’t play into them at all. Instead, saving throws have their own proficiencies. So, if the same 1st level fighter from the Starter Set was asked to make a Strength saving throw, they would add +5 from their STR ability modifier and +2 from the STR save proficiency to their d20 roll.

Similar to skill checks, saving throws have a DC that must be reached or passed in order to succeed. Some attacks (mainly area of effect attacks) will still apply half damage to creatures that successfully save.

What is a skill contest?

When creatures are directly opposing one another, a skill contest may be used to dictate the result. Instead of having a DC, all creatures in the contest make a skill check with the agreed-upon skill. Whoever rolls the highest after applying necessary modifiers wins the skill contest.

Features that allow your to gain expertise are:

Keep in mind that, although the DM is the be-all end-all in terms of what skill checks can be made and when, if you are a Dexterity based Rogue it could be worth it to request to make an Acrobatics (DEX) check instead of an Athletics (STR) check in some circumstances such as climbing, jumping, or running. The Player’s Handbook has a collection of these instances where you could apply different Ability modifiers to skill checks such as:

As long as you describe what you are trying to accomplish in a meaningful, descriptive way, most DMs will allow it. Please do not argue with your DM if they rule your scenario a bit too “out there”.

We’ve whipped up a Skill Check Flowchart to help you identify which Skill will be required for which kind of action:

What Skills are available?

Situations of Use: Your Acrobatics skill encompasses your ability to stay on your feet in a tricky situation. The following are examples of when you might be asked to make an Acrobatics check:

Situations of Use: According to the PHB, Animal Handling only relates to making checks with domesticated animals. These checks might include:

Situations of Use: Your Arcana skill reflects your knowledge in the realm of spells, magic items, eldritch symbols, magical traditions, the planes of existence, and the inhabitants of those planes.

Situations of Use: Athletics encompasses your ability to succeed in difficult situations you encounter while climbing, jumping, or swimming. Examples include the following activities:

Situations of Use: Your Deception skill encompasses your ability to convincingly hide the truth, either verbally or through your actions. This deception can encompass the following:

Situations of Use: Your Insight skill encompasses your ability to read the true intentions of a creature, such as when searching out a lie or predicting someone’s next move.

Situations of Use: When you attempt to influence someone through overt threats, hostile actions, and physical violence, the DM might ask you to make an Intimidation check.

Situations of Use: When you look around for clues and make deductions based on those clues, you make an Investigation check. Examples would include:

Situations of use: Your Medicine skill encompasses your ability to stabilize a dying companion or diagnose an illness.

Situations of use: Your Nature skill measures your knowledge about terrain, plants and animals, the weather, and natural cycles.

Situations of use: Your Perception skill measures your ability to spot, hear, or otherwise detect the presence of something. It measures your general awareness of your surroundings and the keenness of your senses. Examples of this would include:

Situations of use: Your Performance skill determines how well you can delight an audience with music, dance, acting, storytelling, or some other form of entertainment.

Situations of use: When you attempt to influence someone or a group of people with tact, social graces, or good nature, the DM might ask you to make a Persuasion check. Persuasion typically comes up over Deception when you are acting in good faith, fostering friendships, making cordial requests, or exhibiting proper etiquette.

Situations of use: Your Religion skill measures your knowledge about deities, rites and prayers, religious hierarchies, holy symbols, and the practices of secret cults.

Situations of use: Your Stealth skill measures your ability to conceal yourself from enemies, slink past guards, slip away without being noticed, or sneak up on someone without being seen or heard.

Situations of use: Your Survival skill encompasses your ability to survive in the treacherous wilderness. This could include: