Explore the Tropical Isles of Manaki in Eldermancy’s Sunken Isles

This post is sponsored by Ghostfire Gaming. You can check out their premium TTRPG products at ghostfiregaming.com.

What is Sunken Isles?

Sunken Isles is an adventure setting for the 5e system developed by Eldermancy in partnership with Ghost Fire Gaming. This book contains a wealth of information to help DMs run an adventure on the Tropical Isle of Manaki.

The project is currently being crowd-funded on Kickstarter, and at the time of writing has crushed its goal of $20,000, sitting at over $285,000 pledged. If you would like to support this project, get access to fantastic preorder pricing, contribute to unlocking stretch goals, and support culturally-significant charities, check out the Kickstarter below before March 18th, 2022:

The Sunken Isles project has been created in consultation with Honua Consulting and Purple Mai’a to ensure that all cultural sensitivity due diligence has been considered and addressed.

The Isles of Manaki are a cluster of magical islands populated by unique creatures, people, and culture. The islands were brought into being by a mysterious deity called The Star Breather, a primordial being that creates beautiful civilizations in its image by placing a piece of itself in its designs. Once The Star Breather has placed a piece of itself in enough worlds, it will cease to exist and leave behind many wonderful creations.

When The Star Breather first created Manaki, it was inhabited by three races exclusive to the islands, each of which are available as new Playable Races:

These races lived together with the island’s spirits to create a perfected sense of natural harmony. However, the thriving natural balance of Manaki was disrupted when their lands were discovered by an industrious king. Upon seeing the powerful magic of the isles, the king’s armies invaded in an attempt to conquer them.

The king’s invasion was successful and he established himself and his followers as inhabitants of the island. This occupation introduced prosperous trade to Manaki, but cost the islands their natural beauty. At the hands of the native creatures and the island’s spirits, the king’s empire fell, leaving behind settlers that had followed the king. The kind Manaki people took the settlers in and their cultures merged.

The king and the settlers that followed him fundamentally changed the islands and warped the original vision of The Star Breather. When the deity checked back in on Manaki, it decided that the islands would have to be wiped clean to regain their beauty. The adventure included in Sunken Isles begins when the spirits of the island begin cleansing the island and returning it to its natural state.

What does Sunken Isles contain?

Sunken Isles is set in Eldermancy, the same universe as other Eldermancy content, like Stibbles’ Codex of Companions and The Seeker’s Guide to Twisted Taverns.

The adventure contained in the book is entirely confined to the Isles of Manaki. This tropical island setting contains a wealth of interesting places and people in a world rife with exploration, allowing Sunken Isles to be dropped into just about any D&D world.

Sunken Isles has a unique adventure structure. The adventure takes place over 20 weeks, and the party can choose between different adventure paths each week. The story changes entirely depending on which route the party decides to follow. There are both benefits and consequences associated with each choice, no matter the path that is chosen. Seeing as there is no set order to the paths, the party can decide to face off against powerful enemies early, but only time will tell if their gamble will pay off. This creates an exciting “risk vs reward” dynamic in the gameplay.

An interesting economy and crafting mechanics

The Isles of Manaki have a trade-based economy. Gold doesn’t have a practical purpose on the islands, so players will need to scavenge, forage, and craft their way to create something worth trading for new equipment. Sunken Isles contains a system to allow player characters to harvest and trade resources around the island and craft anything from simple weapons to complete sailing boats.

Easy to use sailing mechanics

Those that have read Ghosts of Saltmarsh will understand that D&D 5e’s official sailing rules are pretty challenging to understand and even harder to use effectively in gameplay. Sunken Isles seeks to remedy this by creating a system of sailing actions akin to legendary and bonus actions. This system also includes unique jobs that both players and NPCs can take on to ensure the entire party is involved in the sailing action, as well as ways to make boring days spent traveling at sea more interesting. Sunken Isles contains tables for each of the significant aspects of sailing you might expect: weather conditions, crew morale, and a diverse set of encounters that change over time. 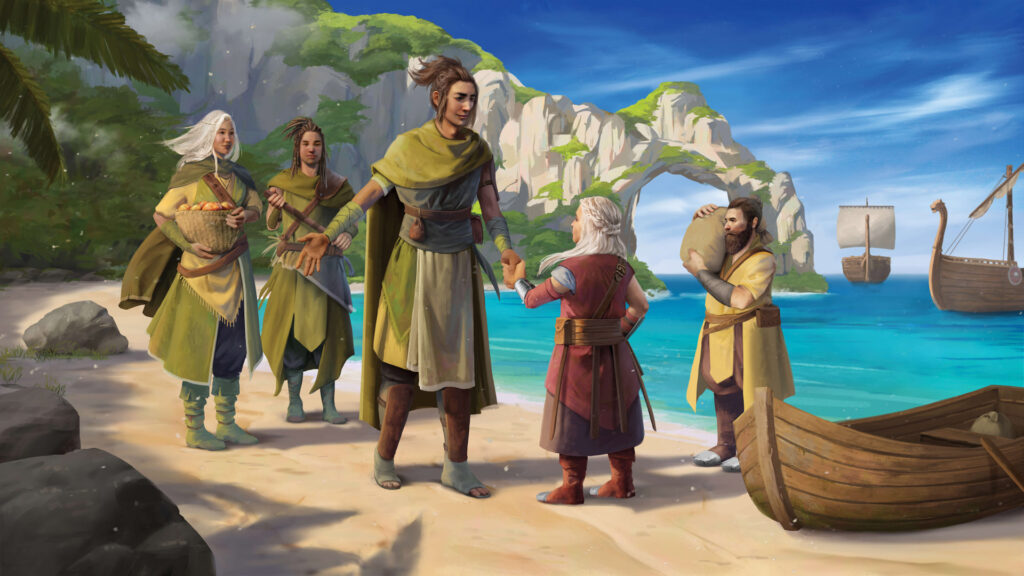 Where to purchase Sunken Isles

Sunken Isles is currently being crowd-funded on Kickstarter. You can get a digital PDF of the project for $25, but increasing your pledge will net you far cooler perks. Depending on your pledge, these perks can include:

For more details on Sunken Isles and all of the awesome perks you can grab as part of the Kickstarter, click the link below before March 18th, 2022: