It’s no surprise that you can expect a great story, tough choices, and nail-biting action from Matt Mercer’s Call of the Netherdeep. 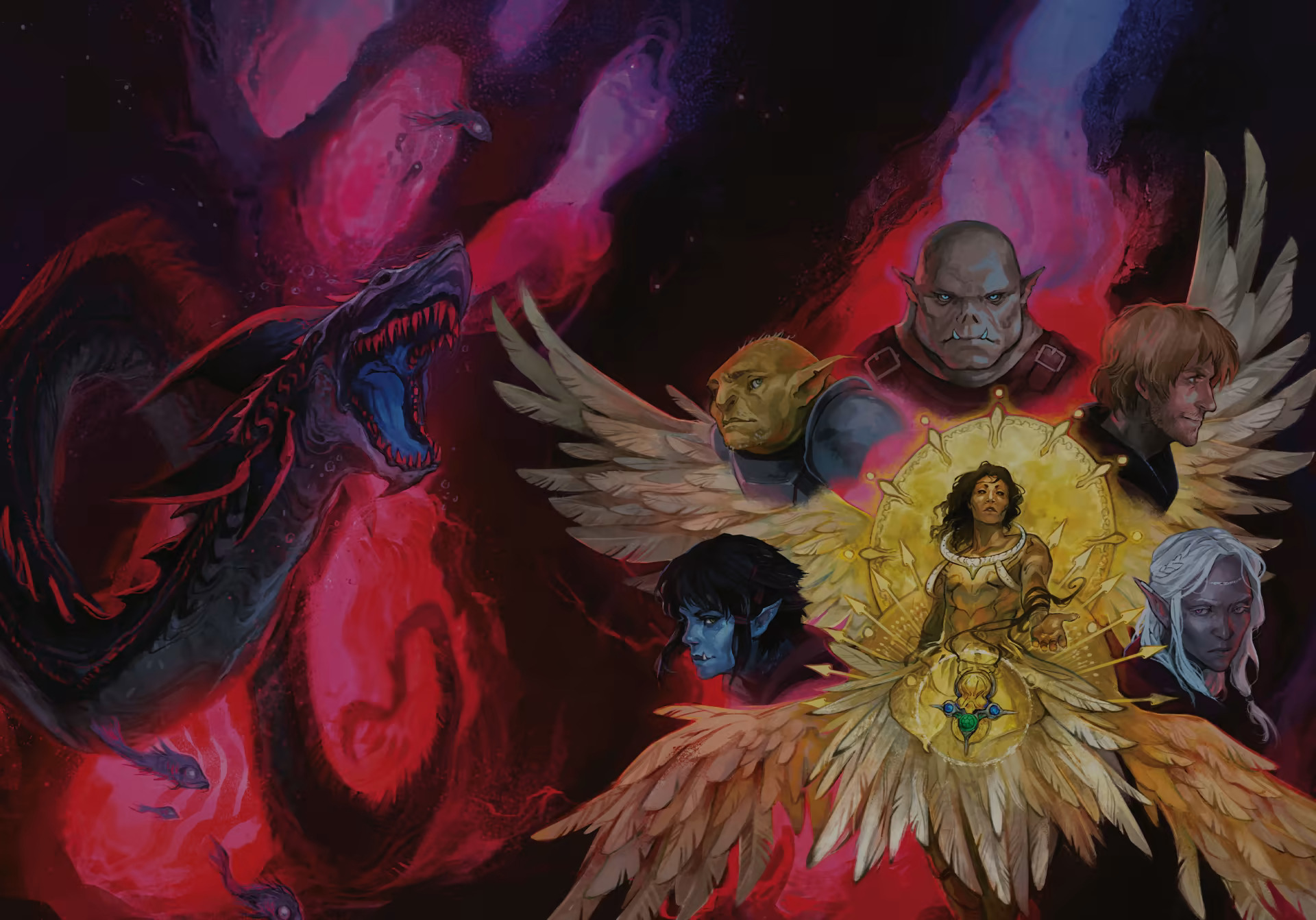 Minttu Hynninen - Wizards of the Coast - Critical Role: Call of the Netherdeep Cover

What does Call of the Netherdeep contain?

Call of the Netherdeep is an adventure for the 5th Edition of Dungeons & Dragons (5e) that takes a “deep dive” into Critical Role’s World of Exandria. This globe-hopping adventure takes players from the Wastes of Xhorhas on the continent of Wildemount, to the oasis city of Ank’Harel, then into the sunken realm of the Netherdeep.

There are no player options contained in this book. If you’re looking for Critical Role-specific races and classes, check out Explorer’s Guide to Wildemount or Tal’Dorei Reborn.

DMs will find everything they need to run this adventure, including:

Will only fans of Critical Role enjoy this adventure?

Call of the Netherdeep will be fun for everyone, even if they’ve never heard of Critical Role. The adventure provides all of the information both DMs and players need in order to have a blast playing it and doesn’t require prior knowledge of the show. That being said, Critical Role fans will be particularly excited by some of the locations and NPCs involved in this adventure.

Players start the adventure in Jigow, a small city in the Wastes of Xhorhas that is mainly populated by competition-loving goblins and orcs. When the adventurers arrive, Jigow will be in the middle of a festival where players can compete in a number of friendly games. During these games, the party will have a chance to meet and interact with the rival party members before the final competition, in which the party and rivals will race each other through a sunken grotto.

In the grotto, the party and rivals will discover Jewel of Three Prayers, a powerful relic that belonged to Alyxian–a long-forgotten hero of a world-shattering war. They are provided a vision of Alyxian and a call to adventure to save him. Once they emerge from the grotto, players are sent on a quest to Bazzoxan to learn more about the mysterious artifact they uncovered.

In Bazzoxan, the party is introduced to individuals from scholarly organizations that stem from Ank’Harel on the continent of Marquet: the Consortium of the Vermilion Dream, the Library of the Cobalt Soul, and the Allegiance of Allsight. Through exploring the town and talking to NPCs from these organizations, players learn that the Betrayer’s Rise, a temple-fortress of the Betrayer Gods located in Bazzoxan, can help them learn more about the Jewel of Three Prayers. Players are then expected to crawl through the ghastly dungeon of the Betrayer’s Rise and are presented with another vision of Alyxian. They are then confronted by a member of the Consortium of the Vermilion Dream (the “evil” scholarly organization) who tries to steal the Jewel of Three Prayers.

After the confrontation, the party is directed towards Ank’Harel where they will work with one of the three scholarly factions to learn more about the Jewel of Three Prayers. During this time, they will be introduced to the Netherdeep and ruidium, a corrupting mineral that leaks from the Netherdeep.

After building up their reputation with the scholarly factions, the party will eventually be tasked with entering the Netherdeep, where they will discover more about the fate that befell Alyxian. From the party’s time spent in the Netherdeep and the clues they’ve gathered throughout the adventure, it becomes clear that Alyxian has gone mad due to his imprisonment in the Netherdeep. The adventure ends with a final confrontation between Alyxian and the party where they can either redeem him, kill him, or unleash his corrupted form on Exandria.

The rivals are constantly showing up whenever things get interesting (think Gary Oak from Pokemon). Throughout the adventure, the party can gain the rival’s favor or ire based on their interactions. Running the rivals will be a balancing act to make them annoying enough to provoke the players, but not so annoying that the party just wants to kill them.

One big issue that DMs may run into is that the rivals may manage to get their hands on the Jewel of Three Prayers before the party does in Jigow. This will cause the rivals to receive the vision of Alyixan, and the players are expected to play catchup and try to steal the jewel back. While I appreciate the opportunity for consequences, I wouldn’t risk the intended direction of the adventure so early on in the campaign.

Personally, I would run the rivals as relatively friendly for the first portion of the adventure and then have them turn on the party at the end of the dungeon crawl through the Betrayer’s Rise.

I think the introduction to this adventure is one of the better intros to a D&D adventure. First off, the carnival has a bunch of really fun activities. Each of the contests and the final race through the grotto are great examples of skill challenges, something that has been majorly lacking in published D&D 5e materials. The grotto itself is one of the best low-level encounters I’ve come across. It has everything: an interesting environment, compelling mechanics, meaningful choices with variable outcomes, and unique encounters. It also helps players get acquainted with underwater combat, which is a big part of this adventure.

The rivals are handled really well in this chapter. They have specific responses to each of the contest’s outcomes which helps them come alive. During the conclusion of the grotto race, either the rivals or the party can become the “heroes” of the story. This interesting dynamic was actually explored in our own adventure, The Heroes of Karatheon. Unfortunately, as we note elsewhere in this review, the rival’s inclusion doesn’t work very well in the grand scheme of Call of the Netherdeep.

I loved everything about this chapter. The open-ended way the party can explore the city, the grim setting with the constant threat of monster attacks, and the Betrayer’s Rise is an absolutely brutal yet wonderful dungeon crawl.

Sandbox Playstyle with Plenty of Direction

Each of the set pieces of the adventure is built with open-ended, player-driven gameplay in mind. There are very few “go here and do that” experiences in the book, and when these do crop up, they’re after the party has actively made a choice to involve themselves or when everything has been accomplished in an area.

Each of the set pieces has very clear directions once the party has completed their tasks there, something that I felt The Wild Beyond the Witchlight struggled with. After finishing up in Jigow, the party is told to go to Bazzoxan to learn more about the relic they uncovered. After Bazzoxan, the party is instructed to go to Ank’Harel because that is where the scholarly organizations can help uncover the mystery of Alyxian.

Once players get to Ank’Harel, they’ll be introduced to three scholarly factions that are all competing for access to ruidium and the Netherdeep. Players can join any faction they’d like and work through exclusive storylines for each faction leading up to the conclusion of the adventure. The faction quests are all quite interesting and this allows for a stellar amount of meaningful player choice when choosing between the factions.

I really like the story of Alyxian and how you gradually learn more of his tragic story. The visions you get sprinkled throughout the adventure really help you understand why he befell his fate.

The Netherdeep is an extremely interesting final dungeon due to the fact that it is almost entirely underwater. The lead-up to the Netherdeep allows players to understand the difficulties of underwater exploration and combat, and provides adequate time for the party to prepare. The only issues that may arise would be for players that have completely built their characters around ranged weapons. Seeing as ranged weapons get disadvantage on attacks while underwater, ranged builds could be in for quite a rude awakening once they get to the final portion of the adventure.

I feel like the rivals don’t really work in this adventure. It’s unfortunate because it’s a really unique selling point and something that’s been focused on in the marketing for this adventure. I just don’t see a world where:

The final confrontation, where you can either save, kill, or redeem Alyxian, will feel very familiar for players that have gone through Baldur’s Gate: Descent into Avernus where pretty much the same thing happens with Zariel.

Unfortunately, this presents the same problem that Descent into Avernus did. The climax isn’t about the players, it’s about this tragic hero they are trying to free/slay/redeem.

What’s the verdict on Call of the Netherdeep?

I think Critical Role: Call of the Netherdeep is a fantastic adventure. It is well-written and can be run with minimal tweaks.

It won’t be necessary for your entire table to be Critical Role fans as the adventure definitely holds up on its own. However, I think long-time fans will absolutely love being able to play through the set pieces introduced in the show.

You will love this module if:

You won’t love this module if:

You can buy Call of the Netherdeep at your local game store, Amazon, or on D&D Beyond.