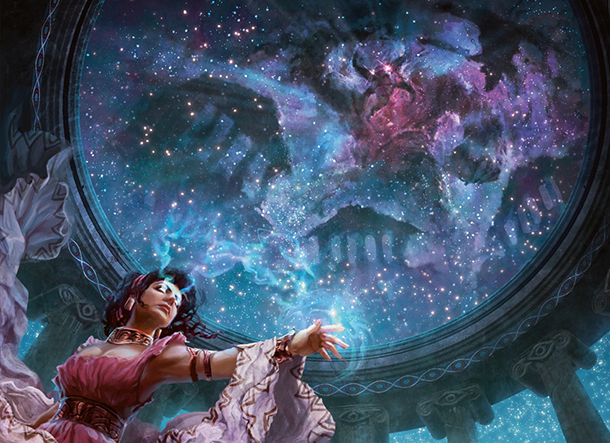 This guide is meant as a deep dive into the School of Divination Wizard subclass. For a full overview of the wizard class, check out our wizard 5e Guide.

For our full class guides, we use the following color rating scheme:

For our subclass guides, we focus mainly on the Blue and Sky Blue options, because the other options are discussed in the parent guide or other subclass guides. We also discuss options that normally would be good for a typical build, but underperform when used in a subclass.

What is the Divination Wizard in 5e?

The School of Divination focuses on seeing into the future, revealing the unseen, and viewing far off people and places. Divination wizards channel these abilities to manipulate fate and influence battles in their favor. While they may not have the raw fire power as an Evocation Wizard, a Divination Wizards subtle touch can be even more effective when it comes to dismantling opponents.

The School of Divination Wizard is presented alongside the other wizard subclasses that focus on the eight schools of magic in the Player’s Handbook.

While it may not seem like it from the limited spells in the divination school, Divination Wizards are among the most powerful wizard subclasses. This is due in major part thanks to the Portent ability, which allows wizards to store the results of their “portent rolls” for later use when a ability check, saving throw, or attack is made by any creature they can see.

On top of this extremely powerful ability, Divination Wizards get the benefits of having an extremely strong base class in the wizard, and all the benefits that come along with it.

Another downside of focusing on the School of Divination is the spell list is one of the smallest and weakest available. This can leave few choices for the Divination Wizard’s Expert Divination and Divination Savant, but luckily doesn’t impact their most potent ability, Portent.

As with most wizards, INT is the biggest priority. Beyond that, DEX can be useful to boost your AC and CON is useful for hit points and concentration checks.

In a race, you’re looking for synergistic ASIs (which can be mitigated if you’re using the Customize Your Origin optional rule from Tasha’s Cauldron of Everything) and racial features that compliment the wizard playstyle. Because Divination wizards will likely have access to a ridiculous amount of spells as it, races that provide access to more spells are secondary, unless they provide access to strong spells otherwise unavailable to wizards.

While Divination Wizards get access to a free use of darkvision at 10th level, it’s not enough to exclude races that provide the ability. Going without Darkvision for the first half of the campaign just to save overlapping racial and subclass features isn’t worth it for something as important as Darkvision.

Below are some races we recommend for Divination wizards. Keep in mind that we exclude setting-exclusive races like the ones found in Eberron: Rising from the Last War.

Gnome: The classic wizard race, especially if you're not using Tasha's rules for creating characters. The +2 to INT is an amazing starting place and both the Rock and Forest subraces provide small mechanical benefits. If you are playing with Tasha's character creation rules and can find a +2 INT bonus elsewhere, the gnomes racial features start begin to look weak compared to other options out there.

Halfling: Normally, halflings wouldn't make effective wizards. But, especially if you're using Tasha's character creation rules, having access to the Bountiful Luck trait is not only extremely powerful combined with Portent, but it's also very thematic.

Fairy: Free, concentration-less flight, a couple interesting spells, and the fairy's Small size should hold no disadvantages for a spellcaster like the Divination Wizard. Because this race has implemented the new system of character creation, you can choose your preferred ASIs, likely +2 INT, +1 CON or DEX.

Tortle: Not particularly exciting, but a base AC of 17 is a solid choice to help with survivability.

Vedalken: 2 INT is just about all you need for your average wizard build. Vedalken Dispassion helps when fighting other spellcasters, and Tireless Protection offers you the chance to get some skill or tool proficiencies you may not normally have access to.

Yuan-ti Pureblood: A couple extra spells and +1 INT are nice , but the real reason you're choosing a yuan-ti is the Magic Resistance ability, which gives you advantage against all spell attacks. The resistance is poison damage isn't bad either, as it's quite a common damage type.

As most backgrounds are setting specific, we’ll cover a couple setting-agnostic backgrounds that can provide some value to your Divination Wizard build.

Criminal/Spy: Great way to get Stealth and Deception, two important proficiencies you normally wouldn’t as a wizard.

Urchin: Great way to get Stealth and Sleight of Hand, two important proficiencies you normally wouldn’t as a wizard.

Sage: Probably the most thematic background, you also get 2 INT-based skill proficiencies that will go along nicely with your maxed INT.

Noble: The free proficiency in Persuasion can help offset your wizards dumped CHA.

The biggest priority is INT, as that’s what effects your spellcasting modifier and how many spells you can prepare. Next, you’ll want to pump CON to help mitigate your low hit die. Finally, DEX will boost your AC, help with Stealth, and improve your DEX saving throws.

STR: You want no part in STR.

DEX: Pump this after you’ve got your CON to a respectable level.

CON: Important for not only staying alive but also for maintaining concentration on our spells.

INT: Your first stat to pump. Get this as high as possible in character creation and use your ASIs to get this to 20 ASAP.

WIS: Beyond Perception, there’s nothing here for our Divination Wizard.

CHA: Dump, your wizard doesn’t need to be likeable.

Hit Dice: d6 hit dice, which is the lowest one out there.

Skills: All INT-based skills, which doesn’t allow for a well-rounded wizard. Try to pick up some social or DEX skills via your race or background.

Divination Savant: Unless your DM has a particular focus on allowing spells to be found and therefore copied, the school of magic’s Savant features rarely come up. Unfortunately, as divination spells are the least common school, this is even less likely to come up than other the other wizard’s subclass features.

Portent: Easily the most powerful wizard subclass feature and is in the running for the most powerful subclass feature across fifth edition. It’s hard to overstate just how powerful being able to decide automatically change the result of two rolls per day. Regardless if your Portent rolls are high are low, they’re extraordinarily useful. If you roll low, you can replace an enemy’s roll to guarantee and failure and if it’s high, replace an allies’.

This feature is so compelling that the Divination Wizard has become a regular dip for power gamers seeking an extremely powerful feature for such a low investment into the class.

The Third Eye: Darkvision, seeing into the ethereal plane, reading any language, and seeing invisible creatures are all situational abilities that can be recreated with the use of spells. But, when you can choose between any of them for the cost of an action, it’s essentially like getting a free casting of a see invisibility, darkvision, and comprehend languages rolled into one.

Greater Portent: The only way to make Portent more busted is to get more uses. Now you can store 3 Portent rolls, allowing for even greater mastery over the outcome of rolls.

Spell Mastery: Because Expert Divination only works when you cast a spell with a spell slot it’s likely not worth picking up a divination spell for the 2nd-level spell here. Stick to shield or silvery barbs as your 1st-level spell and misty step as your second level.

Signature Spells: Same thing rings true as with Spell Mastery. Lucky for you, there aren’t that many worthwhile 3rd-level divination spells.

We cover the best spells for wizards in our wizard guide so, in this section, we’ll discuss some spells that only apply specifically to Divination Wizards.

The most important things to remember when considering spells for Divination Wizards are:

For our Divination wizard, we’re going to lean extremely hard into the theme of a creature that can predict the future and shape the battlefield around their party. We’ll choose a stout halfling to get some survivability and adjust the racial ability scores to +2 our INT and +1 CON. This will give us the halfling’s Lucky trait off the bat and open up Bountiful Luck in the future.

From there, we’re keeping our eye out for  4th, 8th, 12th, 16th, and 19th levels to boost our INT and pick up some more fate-manipulating feats. By 12th level, we’ll have Portent, the halfling’s Lucky ability, the Lucky feat, Bountiful Luck, guidance, and bless. This means we can:

I want to note that this build is meant as an exercise to show just how insane Divination Wizards can get. Most tables will be okay if you choose a couple options listed below, but choosing all of the options can make DMs extremely frustrated. I’d caution against playing this build as is unless you’re specifically playing a high-power campaign with other min-maxers and a DM that knows how to handle these types of builds.